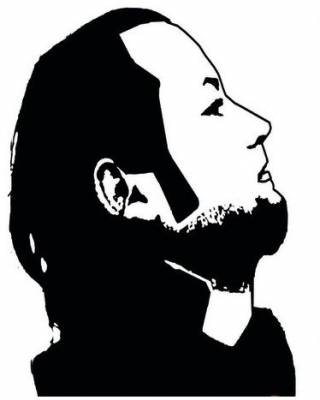 A trial salient of political expediency and procedural arbitrariness, with both inadequate and made ​​up facts distorted on the Procrustean bed of Counterterrorism Unit and special investigators. A case that highlights the orchestrated by the media and police – judicial management of the banned and the resisting. It is a political experiment, combining the deus ex machina of police repression and the scientific- like DNA, with the Passe-partout law-enforcement Article 187A of the so-called terror law.

It also has an importance from a legal standpoint that there is not even half a credible evidence against me and on the other hand, as a consequence of this lack, there is a disregard of any sense of presumption of innocence. The accused is asked to prove his innocence and not the court the accused’s guilt, according to the guarantees allegedly provided by the, influenced by the Enlightenment, Criminal Justice. Even worse in my case I am called upon to refute the charges  without confronting tangible evidence, but a rationale based on lies and arbitrary conclusions about my lifestyle and not for specific acts.

More than the judicial there is a police dimension of great importance, since many questions arise. The most basic of all is why did the Counterterrorism Unit deal with the Paros robbery and not the actual police. Quite simply because there was a dead man and actually a citizen. A first-class opportunity to connect the anarchists with actions not directed against state and capitalist targets, but against civilians . An effort that began in 2009 (?) with a strange case of a bomb explosion that left a young Afghan immigrant with fatal injuries and continued with the tragic events of the Marfin Bank building in Athens. Media and Counterterrorism Unit struggle to convince that anarchists are a danger to anyone but not for power.

Also, there is a matter of what the Counterterrorism Unit is and what is its role. The role of course is not to solve cases of robberies and homicides. This is a job for the police dpt. The role of the Counterterrorism Unit is to dispel the anarchist space and any community of struggle, with the pretext of ” dismantling ” armed organizations. Thus, the “wrong” arrests it’s not a result of inability , but rather of the ability to create a climate of fear and panic among the people that struggle. Modern democracy is not supposed to prosecute ideas but prosecute acts. And when there are no acts some are invented.

In this way the vacancy that the Counterterrorism Unit had prepared for me since the December of 2010 was filled. On December 4, 2010 six anarchist comrades were arrested  after  a ” monumental ” counter-terrorism operation . An operation that developed into a fiasco  because the 6 arrested and accused of being members of the same group did not even know each other, something that was confirmed a few months later in court, concluding to the drop of these charges for the 2 of them. Concerning the other four, despite the triumphalism of Christos Papoutsis, Minister of Public Order at the time, there were not further charges than gun possession and without a set of legal alchemy it would be impossible for the state to charge them for participation in SPF (Conspiracy of Cells of Fire organization).

The Counterterrorism Unit of course knew about my friendship with Kostas Sakkas , with whom we were classmates from 2002 to the theological school of Thessaloniki. That’s how they had placed me, an “unknown” person, under surveillance. An “unknown” person who by “coincidence” happened to have my characteristics and was placed in existing and non-existing meetings. In fact I was not at all an “unknown” person to them, but they had already left a place in the case file for me to fill the appropriate time. And the time for their communicational purposes came in August 2012. It’s impressive that this “unknown” person which was not arrested in December 2010 because it was not considered important, was recognized, despite its small importance, two years later.

The Counterterrorism Unit chose to put me in the place that they had kept in their case file for me in the most resounding and unreliable way. They chose to present me as being involved in a robbery with homicide , based on DNA they ” found” in a hat that supposedly fell from the offender, in the same time that a series of suspected irregularities , inconsistencies and omissions in both the collection of evidence and the laboratory examination show that these evidence were nonexistent, if not crafted.

My case is no exception, it is a typical case in the modern state. It is commonplace that in the manifestation of the systemic crisis much has changed economically, politically and socially. The Capital is changing its enforcement conditions and the emergency regime is imposed as permanent. The police – judicial complex upgrades its role and from complementary institution upgrades to a peak tool of power.

The penal suppression extends and deepens its role, reserving for itself the post of the sole regulator ensuring social cohesion. In the same time power is seeking whatever social consensus can achieve through demonization by the media and criminal punishment of the resisting and the excluded, bringing the most conservative parts of society together using the ideology of legality.

The capitalist totalitarianism in its most modern form articulates with increasingly military terms addressing a wide community as a potential enemy within. The anarchist space is categorized along with socially excluded pieces in the same context, that of the destabilizing factors, and treated with zero tolerance.

On one hand we have police occupying with its suffocating presence every inch of public space, wiretapping that surprise no one and surveillance cameras in every ten meters that no one notices anymore. On the other hand political spaces and socially excluded parts of society pass into the sphere of criminal management. Mobilized workers, strikes declared illegal, terrorist law in demonstrations , Skouries, student occupations , Xenios Zeys , HIV positive people , Roma. The media, justice, and police inquisitors enforce legality as a sacred concept. As dogma. Legality must be followed religiously, if not with devoutness. As a prayer that will bring the holy development. The scientific dystopias as reflected in the literature and cinema stare contemporary reality in awe.

History does not go in circles but it also doesn’t go straight. History goes where we take it. And if one extreme, that of proponents of capitalist totalitarianism (whether expressed by Samaras’ memorandum bullishness either the Nazi bullying of Michaloliakos) insists on taking history at the deepest darkness and absolute barbarity, the other extreme, we anarchists , the Communists, the excluded , should stubbornly, despite our yet small forces,  push history to revolution, emancipation of the proletariat, the liberation of human activity from the capital- labor connection , push history to anarchism and communism .