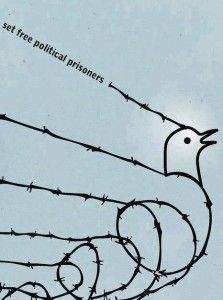 On Monday, November 11th, 2013 Spyros Stratoulis went on hunger strike, demanding that the aforementioned charges against him be dropped, and claiming his immediate acquittal by judicial decree in order to be granted days of leave again.

Spyros Stratoulis was incarcerated in Greek prisons at the age of 17, and has been held for nearly 22 years. Despite his long incarceration, Spyros received days of leave from prison only in the past two years. In July 2012, Thessaloniki police directorate unleashed a coordinated operation, detaining and persecuting dozens of people on charges of involvement in an alleged criminal organization dubbed “Hangouts of Thessaloniki”. The mammoth indictment was based solely on records of phone tapping.

In April 2013, imprisoned Spyros Stratoulis was summoned by the investigating judge to testify as defendant in the case. Criminal proceedings against him were initiated on the basis of others’ gossiping in phone calls tapped by the police.

Although no remand or restrictive order was issued against him in relation to this case, the provision of article 55 (pending felony charges) of the Greek penitentiary code was automatically activated. Ever since this provision was applied, not only was he deprived of regular exit permits that he fought so hard to get, but he is also bound to remain hostage pending charges, with a high probability of having to serve the maximum prison sentence length, which is 25 years in Greece, awaiting trial in this particular case, while he would have otherwise been able to request his release on probation in September this year.


Dismissal of all charges brought against him in this case