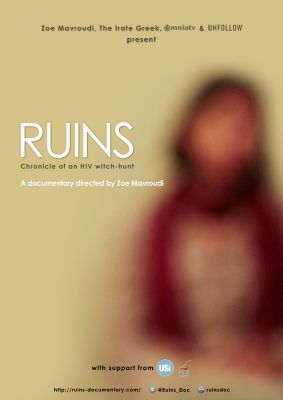 In the past three months, we have made available on the website of our documentary Ruins: Chronicle of an HIV Witch-hunt, a donate page with details on the legal battle of the women who were victimized by Greek authorities in 2012.

Donations made through our page will be handled by the non-profit UK organization Union Solidarity International, which funded our film. The purpose of this initiative was to offer support to the legal battle for justice for the women, who are represented by the Group of Lawyers for the Rights of Refugees and Migrants.

During the past few weeks we have intensified our call to all of you who have watched our documentary online or at one of our free, public screenings around the world, to contribute as much as you can to this important legal struggle.

So far donations have reached 592 euro.

We would also like to briefly update you on the upcoming court cases and needs of the legal battle:

Eleven of the women are going to be tried for a misdemeanour of grievous bodily harm this coming March 28. Two more women will be tried under the same charge in September 2014.

On April 4 there will be a trial for two applications for compensation for wrongful detention out of a total of 8 women who have already been acquitted in the Greek courts.

As mentioned on our website, a lawsuit has been filed against the doctors and police officers who carried out medical examinations in detention facilities, the leadership of the Hellenic Centre for Disease Control and Prevention and the Anti-Trafficking Department of the Directorate against Organized Crime in the Attica Police General HQ, which is still pending preliminary examination. The lawsuit was co-signed by the persecuted women, the Solidarity Initiative for the Persecuted HIV-positive Women and the NGOs PRAKSIS, Act Up Hellas, Positive Voice and Centre for Life.

Lawsuits before the European Court of Human Rights are also pending examination for 12 of the victims.

The legal battle was the main reason why we decided to complete Ruins within the span of a few months and release it in the public domain. Our work was aimed not only at informing the world on this case which was misrepresented in Greek mainstream media but also to support the fight of the people harmed by the Greek authorities.

We invite you once again to visit our website and make a small or large contribution.

The favourable outcome of this legal battle could set a positive precedent for future legal cases among an ever increasing number of human rights violations in Greece.

Punishing those responsible for these abuses and compensating the women, is the only way some justice can be done, absent of any attempt at political accountability.

On the abolishment of the Health Decree ’39A’