Prisoner suffering from Kaposi’s sarcoma, was given an IV treatement instead of chemo.

Korydallos, which is the largest prison in Greece by far, is an example of state negligence and punitiveness to those incarcerated. Those treated in the Prison Hospital have gone on a 43 day hunger strike earlier this year, demanding the improvement of the hygeine of the space as well as the hospital equipment and the provision of vaccines to ensure better quality of medical care.

The following letter was written by 126 hospitalized prisoners in Greece and was posted to the Ministry of Justice about a month ago. Since there has never been a response from the ministry on how their porblems can be solved and how their demands can be met, the prisoners would like to inform the public about these serious issues, asking why these are remaining unanswered… 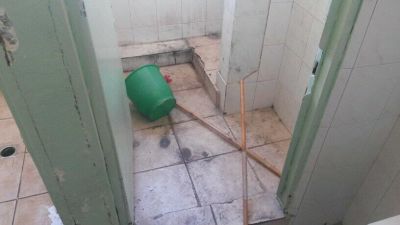 Dear General Secretary of the Ministry of Justice,

We find ourselves again in the unpleasant position to report the following:

1. The living conditions in the prison hospital in Korydallos, which is the largest by far prison in Greece, are inhumane, degrading and torturous. Despite the limited capacity of the hospital rooms that cannot house more than six prisoners, there are currently 15-20 patients housed in each room, which is extremely unsafe considering that some are dealing with illnesses that compromise the immune system, others carry contagious diseases and some have disabilities. Οur living is in danger and our environment constitutes torture due to the violation of all our human rights and dignity. We want to clarify, that the prison hospital is designed to provide care to only 60 inmates and not 210, which is the exact number of patients currently receiving treatment here.

2.We feel the need to report that apart from the health issues we are dealing with, there has been an unmanageable outbreak of TB, hepatitis and other serious contagious diseases in our prison which are constrantly spreading from inmate to inmate, thus making it even less safe for us to reside here. These incidents, which the ministry and the prison management are fully aware of, are intentionally left untreated, reinfoncing an inhumane punitiveness against us. Despite the testimonies of the prison doctor Mr. Georgoulas and as well as the insufficient repeated testing, the problen is not under control, resulting in new inmates being diagnosed with new illnesses daily. We would like to say that it is not only us facing this danger, but also prison guards, medical staff and to an extent our own families who come to visit.

3.We would like to report that the prison management is ruthlessly violating the law and the penal code. There are cases of discrimination against specific prisoners regarding the provision of leaves of absence from prison as well as visiting rights, which only enhance our exclusion from society. Even prison employees have resigned for the very same reasons.

4. We would like to inform you that all court cases regarding appeals at the Pireaus Court, conditional release of prisoners and provisions, are not completed in a timely manner which causes lenghty delays. Also an incorrect enforcement of the law, such as the extensions of statute 110A of the penal code, orders to complete fact finding reports for statute 110A, enforcement of restrictions on statute 110A, can lead to delays taking up to six or seven months.

Dear Secretary General, the recent law for the 2/5 is beneficial to ill inmates but a number of attorney generals, apart from limitations, also impose monetary donations to charities rendering the law ineffective. Living with chronic illnesses means that most of us can only survive on benefits since we are patients with small chances to live and none financial capability. Therefore, we demand that you make arrangements for the correct, lawful and humane treatment of the vulnerable population that the patients of the Korydallos Prison Hospital constitute. 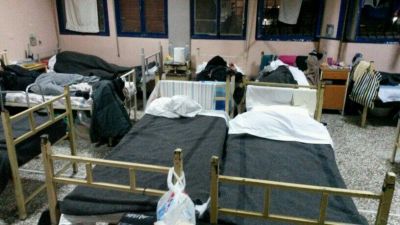 It has been proven that all the measures and reforms that have been made legal until today are incomplete, ineffective and superficial, which, consequently, do not contribute to the betterment of our living conditions but they actually worsened the living conditions in the prison hospital. We demand that patients, which constitute only 1-1,5% of the prison population in Korydallos, get the same treatment as any vulnerable part of the population and we propose the following:

1. Currently, those with chronic illnesses serve only the 2/5 of their sentence if they have been sent to prison for ten years or less. However, due to our low life expetancy, we demand this rule to apply to all prisoners with chronic illness, while preserving the current legislative restrictions.

2. To push a reform in current legislation that allows low life expectancy, in case that can be proven, to constitute a mitigating factor for the court verdict.

3. Regarding those in remand, which might fall under statute 110A after expert testimony, we demand that they are granted conditional release with restrictions while the enforcement of 110A must be ensured by the judge.

Photographs were made available by prisoners on www.twitter.com/kolastirio

Prisoners’ Initiative: ”We demand a public explanation from the Minister of Justice”