One of the injured students at the University of Athens (photograph: K.Katomeris, Eurokinissi)

The Students’ Union of the University of Athens, made a decision on Wednesday to occupy the building housing the School of Law. The occupation, scheduled to last until the 17th of November, which is the anniversary of the brutal attack of the Greek military against the student uprising in 1973, never happened. The Dean of the University of Athens, Mr. Fortsakis, requested the presence of riot police outside the building from the night before, in order to prevent all students from entering. 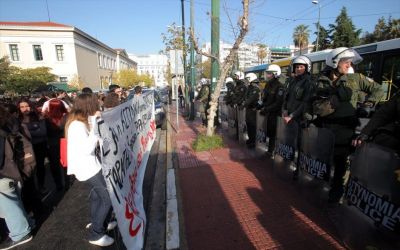 The Athens University of Economics also proceeded on a lockout, which according to a statement by the Autonomous Radical Union of Students, is to repress the creation of a mass student movemment comprising of high school and university students -at a time when 104 high schools in the country are already under occcupation. The Union, states that the government aims at repressing all political activism of the student body.

While a number of students had gathered outside the building housing the school of law yesterday morning, riot police aiming at dissolving the crowd attacked the peaceful protesters using tear gas, chemicals and brute force which resulted in the transfer of two students to the E.R, one of which was in critical condition. 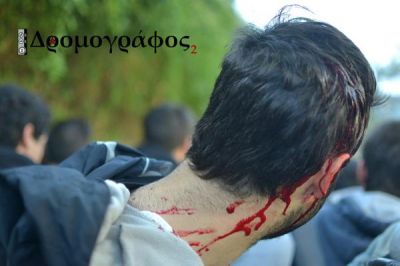 Earlier in the evening, students along with citizens who joined in to express solidarity, marched through Athens in protest against state violence. The march ended at the Polytechnic School of Athens, a symbolic location of uprising and revolt.

At that point, protesters witnessed the vehement attack of riot police, using tear gas, flashbangs and plain violence against the protesters, many of which were young students. 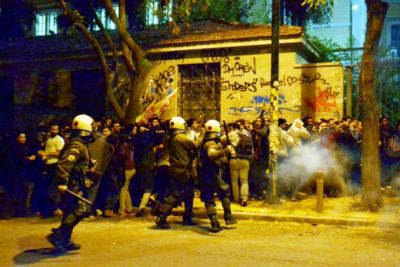 Policing in action: An example of ‘protecting’ citizens with clubs and flashbang grenades last night in Athens (phot. Eurokinissi)

‘Police officers rushing through the side streets, screaming loudly ‘Fuck them! Fuck them!’, clearly seemed to be enjoying it as for 15 minutes they were beating unarmed students incessantly, many of which had already fallen down. Riot police were continously stepping on the bodies of students on the ground and spraying chemicals directly in their faces while throwing around flashbangs. They only stopped to articulate their enthusiasm for what they had achieved. The only lucky ones, were those who managed to find refuge at the Polytechnic School of Athens through the gate on Stournari street, in those 30 seconds that intervened between opening the gate and the commencement of the brutal attack towards the 1500 students.’

The reporter correlates the fascist behaviour of the police with the fact that they constitute the majority of voters of the Golden Dawn.