omniatv english
Anarchist prisoner Nikos Romanos: on a hunger strike to defend the right to education in prison
ΚΟΙΝΟΠΟΙΗΣΗ

Photo from last night: Nikos Romanos looking through one of the windows of the medical facility he is currently hospitalized (credits: Dromographos)

The political system has gone to extremes to square accounts with anarchists and whatever choices they have made. The same young men have been defendants in an unremitting chain of similar trials, that even district attorneys and judicial authorities have questioned, and are detained in prisons equipped with military equipment and prevalent conditions of ‘war’. But still, these do not seem satisfying enough for the Greek state of Justice!

Now the life of a man is at stake in a very difficult time for society and a political system which pushes over the edge any sense of justice. The young man, Nikos Romanos, is slowly dying because he has been denied of his legal right to attend his classes at university.

If the authorities could bother reading the district attorney’s oration on the trial of his conviction on the Velvendo’s case, they would have had a better understadning on how non-violent the robbery was and how through texts, testimonies and public announcements it has become clear that the state is not dealing with a ‘maniac criminal’. The incapability and absolute reluctance of the Ministry to provide an immediate resolution to this issue could lead to the loss of a young life despite what he commited, or how much and in which way he acted wrongfully.

Is it rational for someone to die in Greece in 2014, because he is demanding equality before the law and asking for his rights in prison to be respected?
Before it’s too late and before the situation becomes irreversible, the minister is obliged to provide an immediate resolution for the matter, today.

Nikos Romanos, remains hospitalized in ‘G.Gennimatas’, as he’s on his 19th day of his hunger strike, protesting the fact that he managed to pass the university entry exmas but is denied furloughs from prison to attend his classes.
Frangiscos Ragousis, the young man’s lawyer, made a public announcement today stating that:

”Nikos Romanos, prisoner and hunger-striker since November the 10th, is fighting the most painful battle against the harshness of the authority he fought against.

With his heart rate reaching 170, heart failure is unfortunately expected like some people have whispered, but they shouldn’t have, they should have shouted it out loud!

The announcement is not a media tactict, he is not begging for compassion and expressions of pity or sadness. These are not compatible to his character.

This is a protest and a call for action. Nikos will lose the battle for life not because he is a self-destructive individual, but because some have forced him to fight in this way, in order to demand one of the two most fundamental rights of humanity: freedom and justice.

As a response to the ongoing and dangerous hunger strike, the government called for forced feeding through an IV, breaking any sense of lawfulness since this constitutes torture, as Nikos Romanos clarified from the beginning that he is abstaining from food and continuing the hunger strike even if that puts his life in danger

The doctors caring for Nikos are doing their duty in a sensitive and quality manner under the supervision and the care of the hospital manager, in order to help save his life and provide him with support at this difficult time.”

Supporters of Nikos gathered last night outside the hospital where he is receiving care, to show their solidarity and support and protest the violation of his rights. Colleagues at Omnia.TV, Menacius and Potmos, who were both present along with other participants, were asked to hand over their identity cards to the riot police, who kept a record of their names. They were blackmailed that their id cards would not be returned to them, unless they provided the police with their home address. 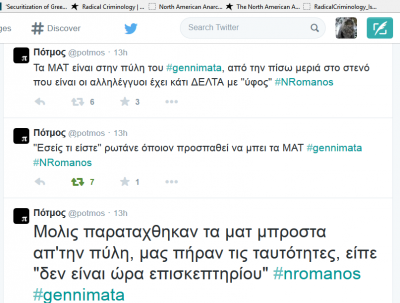 Excerpt from Potmos’ time-line on twitter, stating that riot police stood in line at the gate asking people ‘who are you’, taking their ID cards and then saying ‘these are not vising hours’. 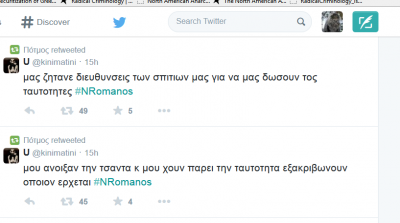 Kinimatini mentions that the police went through her handbag to obtain her ID card and is blackmailed to provide her home address if she wants her ID to be given back to her.

The following video, by the exceptional photo-reporter Dromografos, who covers extensively all grassroots and political activism in the country, shows Nikos raising his fist and then waving at his supporters through the window of his hospital room. The supporters chanted numerous slogans including the following:
‘Niko hold on until the day of freedom’
‘The passion for freedom is more powerful than any cell’
‘ The state calls scum the militants, scum are the police’

Recording of the chants (by Perseus999)