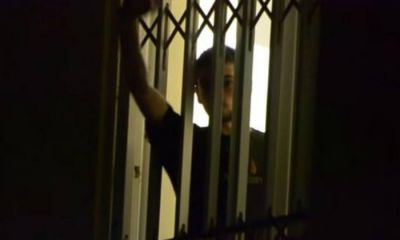 I’m trying to put down on paper, the remainders of my cohesive thoughts regarding the latest developments and the new rejection of my appeal for educational furloughs.

Since the first days of the hunger strike, I had said during my intervetion at the solidarity assembly at the Polytechnic School, that the rejecting response of Nikolopoulos, who all this time insisted on not having any authority over the matter, was the beggining of a state tactic aiming at my extermination. This political assessment has been completely confirmed. Initially, accrding to an order by the Korydallos Prison Attorney, Evangelia Marsioni for my force feeding, a deed that constitutes rape and has led people to death, among which, Holger Mains in Germany and members of GRAPO in Italy. To their honour, the doctors in the hospital, threw the attorney’s order in the bin and denied to commit this crime on behalf of the state.

Next, my resort to a judicial council out of prison (a legal move many prisoners choose to make when the prison council rejects their appeals) was overruled on the excuse that they are bound by the decision made by Nikolopoulos, the exact same decision, I was making the appeal against.
For those who lack any rudimentary understanding on politics, the intervention of the Ministry of Justice, a day before the convocation of the court, was a clear order for the rejection of the appeal and I will immediately proceed to explaining why.

The announcement published by the Ministry of Justice mentions that Athanasiou (Minister of Justice) does not have any authority, to add the rest: ”The educational furloughs are provided by the prison council which presides the attorney, while for those in remand the permission of the judicial authority that ordered their temporary detainment is also necessary.

To cut a long story short, the validity of my appeal to this court is cancelled by the Minister of Justice, plain and simple. All this is dressed up with the hollow proposition for distance learning courses on teleconferences, instead of educational furloughs, which is not reasonable because there are classes taught in the lab that require obligatory participation, while this leads prison councils to the complete abolition of furloughs, since their fear of responsibility is well-known and the solution of teleconferences will be enforced to all prisoners.

With the same logic, soon we will only see our families on visiting hours through screens for security reasons, just like our trials. Technology in the service of ”rehabilitation” and justice. Human progress or fascistization…history will judge that.

At this point I would like to mention the role of the special appeals interrogator Eftyhis Nikolopoulos, who had taken specific orders from his political bosses at the Ministry of Justice from the first day I began the hunger strike, which explains why everyone keeps identifying him as responsible. As an exchange for his ‘services’ he will eventually be promoted to the Supreme Court (Areios  Pagos), which is exactly what happened to Demetris Mokas, a pioneer in tenths of expeditions of repression against anarchists. Now, he is enjoying the fat salary of the judicial elites of the Supreme Court. Chance? I do not think so.

In any case, if the state commits my murder with its stance, Mr. Athanasiou and his pals will remain forever in history as a gang of murderers, the moral accomplices of torture and murder of a political prisoner. Let’s only hope that free spirits will be found in the future, to judge what’s fair in their justice in their own way.

Concluding, I want to send my complicity and friendship to all those standing by my side by all means.

I want to say two things for my brothers, Yiannis who is also hospitalized, Andreas, Demetris and many more.

FOR AS LONG AS WE LIVE AND BREATHE LONG LIVE ANARCHY!
ON THE 6TH OF DECEMBER OUR APPOINTMENT IS ON THE STREETS OF RAGE
MY THOUGHTS WILL TRAVEL AROUND THE USUAL STREETS
BECAUSE IT’S WORTH LIVING FOR A DREAM, EVEN IF IT’S THE FIRE THAT ‘LL BURN YOU DOWN
AND AS WE SAY ‘STRENGTH’!