The Syrian refugees staged a 26 day long sit-in at Syntagma Square in Athens, demanding the official recognition of their rights as victims of war: housing, sustenance, social support services and travel documents. The men have risked their lives going on hunger strike for 21 days asking nothing more than humane treatment and an opportunity to travel to safer countries within the E.U. to ultimately reunite with their loved ones who were left behind: brothers, sisters, children and spouses. Despite Athens Municipality officials declaring that the 300 refugees would be provided with housing, only 60 individuals have been transferred to a shelter so far. On Monday, the refugees were attacked by riot police and were permanently removed from the square.

The protesters at Syntagma Square were caught off-guard after being approached by riot police at 3 am on Monday, a time when most of them had already fallen asleep in the cold square. Fifty-one individuals were forcefully escorted to police vans, many of them shackled, while a man was injured during an attack by riot police. It is unknown whether he received medical care. Six women and 2 young children were among those arrested, who were detained at the Immigration Centre at Rally Square and were discharged later in the afternoon.Their personal belongings including documentation, shoes, ripped duvets, and clothes laying on the ground were cleared by street cleaners.

Members of the ‘Movement Deport Racism’ were notified of the violent arrests by Syrians who had managed to flee from the scene and rushed to Syntagma Square. They found the refugees nearby in a state of exhaustion and fear, worried over the fate of those taken away by the police. The refugees, many of which are young families with babies and toddlers, entered the country as a last resort and experienced deplorable conditions as a result of state indifference: homelessness, hunger and insecurity for the future. Supporting activists and groups remained by their side. During the protest, OmniaTV’s ToSofoPaidi, reported: ”The hospitalization of someone among the protesters collapsing on account of exhaustion and the psychological ramifications of the conditions they experience, is a daily incident.” In spite of that, the refugees, both victims of the destruction of a country and fighters of resistance against politics of exclusion in a hollow European democracy, never gave up on their demands.

Athanasios Karambelis, a medical doctor who proclaimed his solidarity to the Syrians, published a statement that highlights the legal framework confirming the status of these individuals as war refugees and outlines the legal provisions regarding their rights as such. The statutes 2C1 and 2A state that: ”Individuals that escaped zones of armed cοnflict or endemic violence, are under the regime of temporary protection.” The legislation clarifies that protective regime means to operate ”centres of hospitality ran by the Ministry of Health, provide social support services and medical care” and allow children attend state schools to receive education. The doctor goes on to say that the operational cost of these centres is covered by the European Fund for Refugees by 80%. He stressed that the Greek authorities, despite being fully aware of the political instability in a neighbouring country, neglected to find ways to accommodate the expected influx of refugees. ”The Minister of Health, is personally responsible for the homelessness of these individuals in the country”, points out Dr. Karambelis.

On December the 5th, a Syrian refugee lost his life in an attempt to cross the border to Albania. Ayman Ghazal, a 50 year-old doctor, participated in the protests for ten days, as the rigid determination of the government not to acknowledge their rights was becoming clear. Ayman felt desperate to find a solution and joined a group of refugees planning to cross the border to Albania in search for a better future. As they managed to find transport vehicles to the North of Greece, they hiked for about four hours during the final part of their journey. Then they came across a shallow river, with the level of water reaching up to Ayman’s waist. The man suffered a fatal seizure when he was walking through the river. His comrades, placed his body in a sleeping bag and headed back to Greece to seek medical help. They encountered an ambulance on the way back and Ayman was transferred to the nearest hospital where he was pronounced dead. The refugees, were then detained, ridiculed and abused by a handful of police officers who shouted ”Wankers, go back to Syntagma Square, there is food and blankets there”. 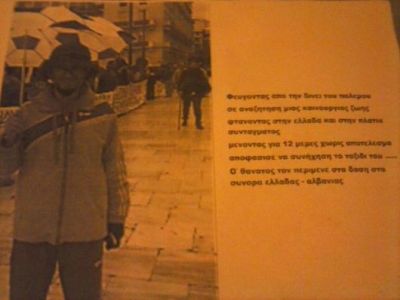 New Democracy MP Adonis Georgiades stated that the sight of refugees was appalling for christmas shoppers, who refrained from visiting the local spot and urged the Minister of Public Order to remove them ”humanely”. He said that Syntagma Square is located at the heart of the shopping centre and despite the tragedy these people experience, there is also the tragedy of the shop-owners who lose business on account of the refugees. His attempt to turn this problem into an issue of local businesses, purports to cover-up the inhumane treatment of the refugees, to absolve the government of its responsibility towards them and to use a xenophobic perspective to manipulate public opinion and vilify the Syrians as the causes of the low profitability of store owners. What’s next, then? Blame them for unemployment rates?After the arrests were made, Georgiades stated ”Thankfully the police did what they had to do. Syntagma can now be a normal square, we can decorate it and enjoy the holidays and these people will be in a nicer place” As the accommodation of the refugees is still not arranged by the authorities, the MP is merely spreading lies through mass media.

On Friday, Ministry of Interior agreed to quickly process asylum applications, provide housing and issue travel documents to the Syrians, but the tension escalated since then. The state did not proceed to make any arrangements regarding these matters and the Secretary General of the Minstry Mr. Syrigos publicly blackmailed the refugees to abandon the square in order to be granted their rights. During the weekend, the hopeful families awaited for buses to transfer them to their promised accommodation, but the authorities sent riot police on Sunday to seclude the square in order to remove them. As local anti-racist activists supporting the immigrants showed up in solidarity, riot police withdrew after a while. Vassiliki Katrivanou SYRIZA MP sated ”For almost a month now, the Syrian refugees, the organizations and the activists that remained by their side have taught us a lesson in dignity. Their struggle gave prominence to the case of refugees as a core political issue and forced the government to stop talking about ”illegal” human beings and reminded us of the tragic loopholes in asylum policy: the lack of accommodation, the understaffed asylum services and the complete disregard for social integration.” 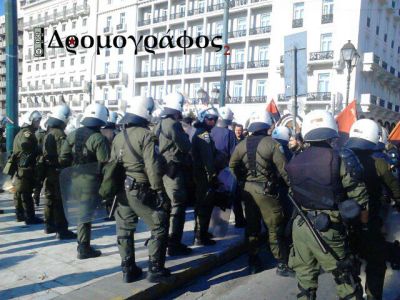 The police forces at the Square of Sunday (Phot.Dromografos) 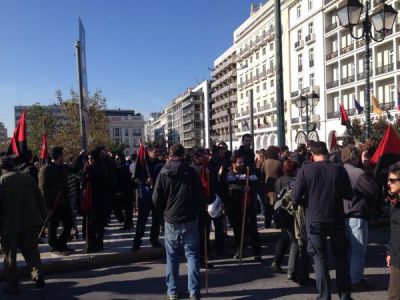 An alarming incident took place at the Square on Sunday: two individuals, a 15 year old boy and a young woman, attempted suicide. They placed a noose around their neck out of desperation, as the government did not seem willing to keep its end of the deal. The suicides were prevented, but the severe effects of these conditions on the emotional trauma of survivors of war, who are being punished in the most cruel way by our government that exposes them to additional stressors, can only aggravate their trauma. The responsibility of the government extends beyond housing and more specialized services must be created to respond effectively to the refugees’ needs: a safe and stable environment, the feeling of self-reliance and sufficiency through employment and opportunities for social inclusion and participation to society. 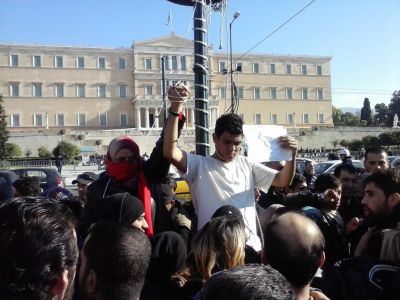 The boy wrapped a noose around his neck (Phot: www.Left.gr)

The cleaners removed the personal property of the refugees in an effort to conceal them from public view. A source that wished to remain unidentified informed OmniaTV’s Sylvia, that many refugees who avoided the arrests are lost in Athens, while activists are trying to locate them. Employees at the Municipality of Athens declined to respond to the requests of the Syrians for returning their properties, which included important documents.

The belongings of the refugees, scattered on the ground were the frail pieces of lives broken by war, laying in the margins of the parallel universe of ignorant passers-by. These people, the survivors of war, have a story to tell. And sadly, it’s not their story. It’s ours. The ”appalling sight” of people occupying public space and starving to death is a reflection of the fascist and racist politics of exclusion and marginalisation deployed by the government to degrade vulnerable populations. You can put up all the Christmas lights you want, but nothing can make this ugliness invisible.