Political prisoners in Greece have been on hunger strike for the past eleven days, fighting for better conditions of detention through the abolition of supermaximum security prisons, decarceration of disabled prisoner Savvas Xiros and release of remanded family members of participants in the anarchist organization Conspiracy of Fire Nuclei (here is the complete list of the demands of the hunger strikers). At the same time, actions of solidarity are increasingly taking place across the country. A few examples, are highlighted below:

Rethymno, Greece
The local office of Syriza in Rethymno, Crete, is occupied in solidarity with the political prisoners. A excerpt of their announcements reads as follows:

”Who are targeted by justice? The systematic criminalisation and povertization of segments of society is not arbitrary, justice is relevant to social class and constitutes a real condition for those who choose to struggle. Those initially targeted reflect the image of the poor (unemployed, small scale criminals, homeless proletarians) and those who consider the armed struggle as an integral part of a diverse struggle (guerilla warriors and bank expropriators). Specifically, prisons and immigrant concentration camps operate as warehouses for the surplus of the workforce and the enemies of the status-quo. Conluding, the mass media as a tool of the state in the name of ”security” and ethnic solidarity, has branded the struggle against hegemony ”terrorism”. Banner in solidarity in the city of Rethymno Source: AthensIndymedia

The office of the ruling party Syriza was also occupied today in the neigbouring city Chania. The squatters highlighted in an announcement that:
” The mobilization of the hunger strikers does not render us uninvolved and we won’t just declare our solidarity but we feel urged to reinforce their own struggle. We have no illusions about Syriza’s statements during its electoral campaign, regarding the abolition of Type C prisns since it has been made clear that their agenda was to assimilate different segments of anarchist activism and to attenuate the resistance against them. In contrast, we escalate our conflict against any form of repression regardless who is in power, since there has never been any time of peace during our war against it.” 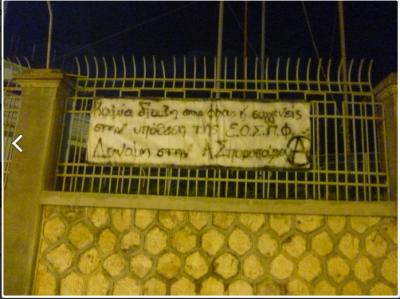 Banner in Chania reads: No indictment to the friends and relatives of the accused on the case of the Conspiracy of Fire Nuclei. Strength to hunger striker Angeliki Spyropoulou (source AthensIndymedia) Banner proclaims solidarity and support of local anarchist activists with the hunger strikers.

The office of national newspaper Avgi has been occupied symbolically from the early morning until 10am. Fax messages were sent to news and government agencies, a banner was hung outside and pamphlets were thrown.

Toumba
Activists gathered in Toumba on Thursday, March 12th, in an effort to inform the public for the ongoing hunger strikes in Greece’s prisons. Around fifty individuals distributed pamphlets against the inhuname conditions of detention and the institution of imprisonment, along with the newspaper ”Apatris” and texts by local anarchist assemblies and groups. Banners were hung around the square.

Serres
Local activists joined the actions of solidarity taking place all over the country. Banners were hung at Eleftheria Square and the local government offices. 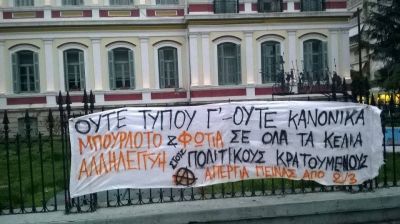 Banner in Serres against Type C prisons and imprisnment, declares the solidarity of local anarchists with political prisoners.

The union of culinary workers published an announcement determined to stand by the imprisoned hunger-strikers. The following, is an excerpt:

We, the workers, comprehend the relevance of our struggles for a common cause. That’s how we deal with the fight for justice for political prisoners. The struggle of the hunger strikers concerns all of us, in and out of prison walls. We stand by anyone joining the resistance. We choose to take part in a mass class struggle, to organize in unions and fight for the complete abolition of capitalism, when workers will be able to command their lives autonomously. 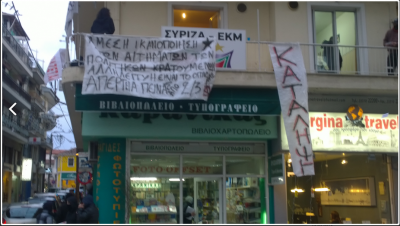 Medical School of the University of Athens Banner by the students of the medical school: Victory to the struggle of the hunger-strikers. Immediate fulfillment of the demands. Demo on 17th of March at Monastiraki.

The law school has been occupied today by a group of anarchists.An announcement was made pulic (read the entire announcement here), which, among others, states the following:

An active movement of solidarity in conjunction with the essence of the hunger strike itself, has the potential to combat in advance, any ”partial” back-pedaling or the oral amendment of the bills, which will be attempted by the state eventually, during its attempt to take control of the hunger strike.

For all the above reasons, we proceed to the occupation of the building housing the Athens University Law School, in an attempt to create a manifold centre of communication and action, until justice is restored for every last one of the hunger-strikers. 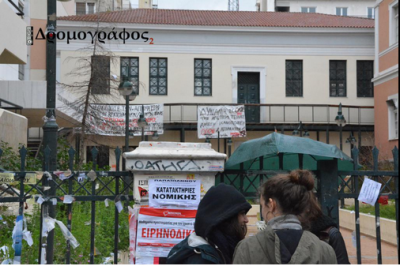 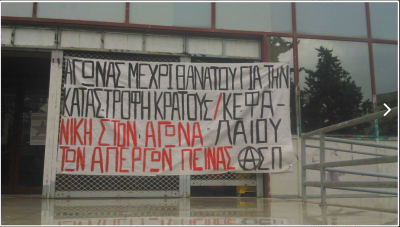 Banner placed at the front entrance of the building reads: ”Struggle until death for the destruction of the state and capitalism. Victory to the struggle of the hunger strikers.

This hunger strike is not irrelevant to the general social impoverishment that we all endure every single day. Creating unified struggles within and outside prison walls is critical for the collective and social emancipation against state and power. The transformation of prisoners into second class citizens is unacceptable and cannot be considered as anything above the abject coercive propaganda that it is, at a time when thousands of families across Greece have imprisoned relatives and their day-to-day lives are directly affected by this. We proclaim our solidarity to the remanded family members of participants in the Conspiracy of Fire Nuclei and demand their immediate release.