The court convened yesterday for the second day of the trial of the neo-nazi Golden Dawn, a criminal organization that has won sits in the Greek parliament propagating a white supremacist and nationalist ideology.

The trial is held in Korydallos Prison Court, a courtroom considered unsuitable by many due to its limited capacity and the disruption caused to the local region where schools and public services remained closed down for security reasons. The mayor of Korydallos pleaded for an urgent replacement venue.

Anti-fascist activists, families and friends of victims, immigrants and reporters held a rally outside expressing their opposition against everything the fascist party stands for. Disability campaigners gave a speech and openly condemned the under-reported disability hate crime and spoke of 50 un-reported cases of assault by members of the Golden Dawn. 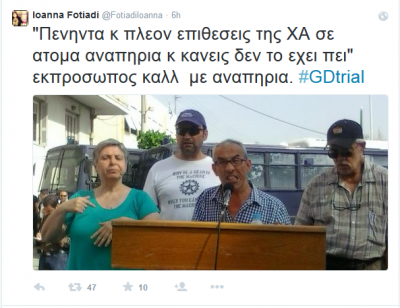 Incidents of police brutality unfolded before the trial as riot police attacked anti-fascist activists using tear gas. It remains unknown whether any activists were seriously injured. 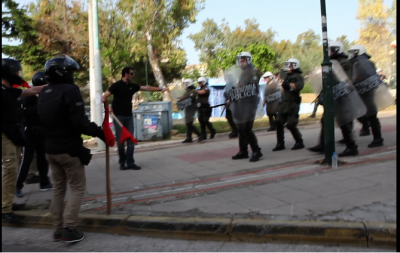 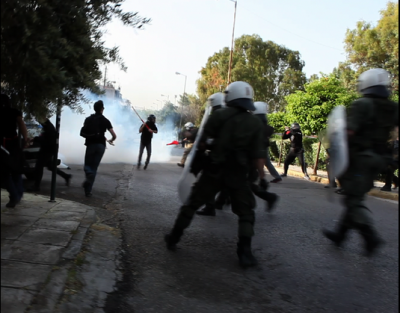 On May 4th, the prosecution attorneys sent a lettter to the media, the Ministry of Justice and the Mayor of Korydallos, underlining their concerns over the safety of witnesses since at least five incidents of assault that the police failed to handle signified the very first day of the trial. Victims were friends of the murdered anti-fascist artist Pavlos Fyssas, two of which constituted key witnesses to the case of his murder. Despite draconian policing measures perpetrators were never found and there are testimonies that police officers present during the attacks declined to intervene.

Nikos Michaloliakos, Golden Dawn’s leader, was absent and so were most members. The court has been adjourned and the trial is to resume on May 12th.

#Gdtrial: The forensic tests of the most significant evidence in the case of the murder of Pavlos Fyssas are now ”missing”

Golden Dawn: ‘Anything moves, we slaughter’