Banner across the entrance of Siemens HQ in Marousi, Athens, reads ”No negotiations with the domestic and international capital”  and calls for a demo on May 23d. (photo/mpalothia).

Recently, the negotiations regarding debt management between Greece and European institutions, which are controlled by German imperialism are the epicentre of discource. Besides the spectacle, the published statements and all sorts of alarmist scenarios, beyond the very issue of public debt lies the truth: the lives of every working person in Greece and Europe are at stake.

The current strategy of German imperialism is comprised on the one hand by the financial and political control over state members through the control of debt and on the other, by a financial system that allows the profits of the banks from state loans to  remain private, while at the same time damages are transferrable to the public through the transformation of private debt into public and the recapitalization of banks.

The Greek bourgeois class, during the accesion of the country to the E.U., to the Eurozone and also presently, in relation to the management of debt and the promotion of capitalist reforms through all sorts of memorandums has made a strategic choice: to ally itself with the european monopolies and primarily serve their interests, while pursuing its own interests on the side.

The time has come for the people of Greece and Europe  to come forward and fight against the imperialist centres and their local collaborators.

We call on the people of Europe to join us in the struggle against exploitation and subjugation. Despite the proliferation of this misleading propaganda there is no clash between Greece and Germany. The Εuropean working class whether in Germany, Greece, Spain, Italy, or France has no reason to fight one another.

Despite recent developments in the narrow field of economy, similar tactics of manipulation are employed in all the other sectors. In the E.U. healthcare, education, agricultural policies, the environment and social welfare are all controlled and when necessary sacrificed on the altar of capitalist expediency. The ”European values”, so highly regarded during the last few decades are now fading away because of their interests, as geostrategy and the global balance become a priority. Thus, the fascists in Ukraine are suddenly our partners and the immigrants coming from Asian or African countries plagued by war are merely soulless numbers burried under the water of the Mediterannean sea.

The E.U. in collaboration with other ”institutions” such as the IMF bares its teeth in these auspicious conditions. This structure of absolute authority will not hesitate to demean the local societies and walk all over proletarians.

The Greek capital and the bourgeois class in each country have no common interests with the working class. We are being misled as the media generated propaganda speaks of ”national duty” since it is them who plunge the economy into a crisis and transfer more than 25 billion euro abroad within the space of one month. Greek shipowners have never paid a single euro in taxes all these years the economy has suffered, in contrast they became richer. When the ruling class speaks of ”national duty” they mean the vehement impoverishment of the middle class, the farmers but mostly, the working class.

We are forced to endure unemployment or precarious workfare, decreased salaries, pension cuts, violation of our rights and feelings of uncertainty regarding our future and can’t afford to remain specators when our lives are looted. We don’t expect others to fight our battles.

For these reasons, we chose to intervene today:

We occupied the HQ of Siemens, a multinational German company, a pillar of German capitalism and one of the major allies of the domestic bourgeois.
We blocked the entrance of the construction company Ellaktor, owned by Leonidas Bobolas, a typical case of local elite who benefited greatly from the money coming in from the E.U. as he was in charge of every single construction project in the country, and is now trying to convince the public through the TV for the necessity of memorandums and staying within the E.U..

The history of Siemens is closely interwoven with the development of European capitalism. During its 168 years, it has been involved in hundreds of cases of bribery of state officials on all levels, great environmental distasters and cruel exploitation of workers, while its support towards the nazi party was limitless as was its decissive contribution to the development of the military mechanism of Hitler: Siemens possesed its own facilities in Auschwitz and hundreds of detainess were forced to work its production line.

Naturally after the end of war, the nazi past of the company was very conveniently forgotten, just like it happened with many other companies, and Siemens received funding through the Marshall plan (with money coming in from the American working class tax payers) in order to contribute to the development of Western Europe.

The presence of Siemens in Greece in relation to the bribery of state officials starts with the founding of the OTE (Greek Natonal Telecom company) in 1949. By 1977 Siemens was the main supplier of OTE and monopolized the provision of electrical system supplies, electrical equipment etc

Recently when the last scandal broke out, the revelation of the existence of an organisational structure comprised by senior members that functioned as an economic criminal organisation, used particular methods to obtain black money in order to render it untraceable and make illicit payments, allegedly bribed civil employees in a large span of corporate activities (civil servants as well as state officials). That means the infrastructure of the Greek state in its entirety – the Ministries of Transportation, Defence, Culture, Health, Public Order, as well as public companies OTE DEK, OTE and OSE etc. The purpose of these activities were  to ensure a privilged and dominant position of Siemens against its competitors as a provider of the wider Greek public sector.

Corresponding activities were simultaneously conducted in many countries by Siemens officials, characterized by such a high level of organization and a wide span of activities, that this can be fairly termed as the greatest financial-industrial scandal in post-war Europe.

The position of the company as market leader in supplying OTE and subsequently the Greek public sector in its entirety, based on these practices, illustrates the prevalence of corruption in the modern Greek state, despite which political establishment was involved in the management.

To us who remain trapped in represssion, Siemens is a target as it represents all the vile characteristics of capitalism: a large company that has ruined lives, countries and consciences through the course of time.

The Greek upper class made a strategic choice: it became inseparable from European monopolies in order to primarily serve their interests and pursue its own interests on the side. The term ”Greek ruling class” is unavoidably connected to Bobolas and his group of corporations which is now in control of the largest part of economic activity in the country: construction and power companies, television, radio and press media, casinos, etc.

The ties between Bobolas and the E.U. are inextricable. Within a period of heavy financial crisis, the ”national” construction manager received 50% of the monetary ESPA funds (in english National Strategic Framework for Reference) for land development which equals to 6 billion euro, forcing his way through a monopoly in public works, always with the loyal cooperation of the european institutions and the local political administration, although, often enough, the funds of ESPA funded other activities of Bobolas’ financial group (such as advertizing and survey companies), creating financial holes which now the people of Greece must pay for through the cuts introduced by the memorandum. Also, the companies of this group, have received extensive loans from the Greek banks, amounts close to 3 billion euro, damages that the working class is called to compensate, since the money saved through salary and pension cuts will be used to recapitalize banks.

Moreover, Bobolas’ group of companies is among the shareholders of Hellenic Gold, a company responsible for mining in the village of Skouries that has caused severe  environmental destruction and was shockingly acquired from state owned land for a fee below its real value.

Simultaneously, the media owned by Bobolas took on the task to sugar-coat the financial drain of the people of Greece. These media  puppets kept repeating how necessary the memorandums are in order to  save our country and placed the blame for the financial crisis upon the workers, while journalists in prominent positions of this group of companies (Mega Channel and Ethnos newspaper) did not fail the expectations of their boss and spoke of healthy enterpreneurship and need for investments and public developments. Their role was so obviously subservient that they left a strong mental imprint as pathetic caricatures of contenporary quislings.

The case of the wealthy capitalist Leonidas Bobolas has amply demonstrated that the Greek capital and the bourgeois of each country have no common interests with the working class. The struggle of the exploited against the imperialist attitude of the European Union and the German capital is also the struggle against the domestic bourgeois class. 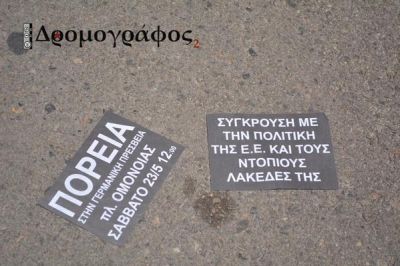 Pamphlets call people to resist against the policy of the E.U. and its local collaborators (Dromographos) 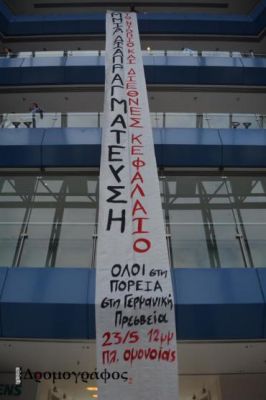 The occupation ended at 2:30 pm yesterday according to photojournalist Dromographos