Exactly four years have gone by since the excessive violence against journalists and protesters took place during the anti- austerity protests in May and June 2011,  but the victims still await for justice. Amnesty International is asking the Greek authorities to immediately identify and indict all of the perpetrators.

The journalist Manolis Kypreos is still suffering the consequences from the excessive use of force by security agents. He lost his hearing while covering a rally against austerity in Athens, when riot police attacked him using a flashbang grenade. Since then he has been dealing with various health issues including problems with stability and complications from a surgical procedure to insert hearing aids. Four years since his injury and despite the evidence that  police have in their hands, including photographs of the officers involved,  the perpetrators have never been identified and prosecuted.

Manolis Kypreos said to Amnesty International: ”Unfortunately, impunity and lack of justice regarding the matter of police violence seem to perpetuate in Greece. Four years after the attack against me there has been no response and no punishment, just political promises which entail denial”.

Yiannis Kafkas sustained head injuries that almost cost his life after being assaulted by police forces during his participation in the anti-austerity protest in Athens, on May the 11th 2011. Yiannis said that the riot police officer hit him with a fire extinguisher. The criminal investigation of his case has discontinued and his lawyers expressed a serious concern regarding the lack of progress.

Marios Lolos, president of the Union of Greek Photojournalists almost died from a blow on the back of his head, an attack by riot police, while covering a demostration in Athens on the 5th of April. He informed Amnesty International that the criminal investigation into his case has not progressed, the perpetrators have not been found and have not been indicted.

Moreover, the disciplinary probe on the grounds of excessive use of force from the competent law enforcement agents is now closed in the cases of assault against Manolis Kypreos, Yiannis Kafkas and Marios Lolos. In December 2014, the Greek Police responded to Unfollow magazine journalists saying that ”the investigations did not reveal any evidence that substantiate misconduct on disciplinary grounds by an agent of law enforcement.’.

Apart from disciplinary and criminal prosecutions, the authorities must also safeguard the remedy for victims of human rights violations by the police. This includes fair and sufficient compensation, a public apology and amendments of relevant legislation and practices aiming to ensure that incidents of abuse will not be repeated.

In February 2014, the Prime Minister Alexis Tsipras announced his intention to create a special parliamentary commitee responsible for the democratic supervision of the police.

During a meeting with Amnesty International in May 2015, Yiannis Panousis, deputy Minister of Interior, competent official in issues of public order and citizen protection, announced his intention to proceed to reforms of the criminal code of policing, in order to ensure the impartiality of the disciplinary investigations regarding allegations of violation of human rights from law enforcement agents. Deputy Minister stated that the Bureau for the Treatment of Incidents of Misconduct by Law Enfocement Members, will begin its operation.

Nevertheless, Amnesty International believes that  the enforcement of these measures will not suffice to tackle the lack of accountability that dominates the police force in Greece. 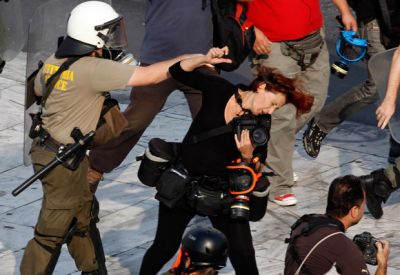 The Bureau for Incidents of Misconduct is not given institutional independence, since it’s meant to operate as part of the Ministry of Citizens Protection which is responsible for the Greek police.

The Greek authorities must create an effective and independent investigative apparatus which will probe into allegations for misconduct. This apparatus must not have any structural or organizational ties to the police and must be responsible for the investigation of every report that has been filed which must then be referred to the competent investigative authorities and not just collect, register and evaluate complaints.The investigative capabilities of this apparatus must not be dependent on the judgement of the competent minister which is exactly what is provided by the law prepared by the Bureau.

Since 2009, many other protesters and journalists have sustained injuries and received threats against their lives during anti-austerity rallies and other demonstrations but none of them has found justice. Despite the numerous reports for violations of human rights from those policing demonstrations, Amnesty International is aware of only a few cases where officers have been indicted and held accountable.

At the end of 2013, eighteen members of the riot police and Delta Squad were indicted for causing serious bodily harm to protesters and exposing them to danger by not having transffered them to hospital. These incidents took place during the anti-austerity protest on the 29th of June 2011. Amnesty International has been informed that the trial will resume in October 2015.

Concluding, in September 2014, an officer of the riot squad was found guilty and was sentenced to 8 months in prison for the assault against photojournalist Tatiana Bolari, while she was covering the protest against austerity in October 2011.