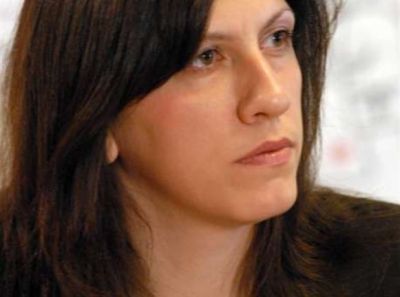 One of the most interesting institutional moves by the newly appointed Parliament Speaker Zoe Konstantopoulou, has been the establishment of an international committee for the investigation of the Greek Debt.

The sessions of the committee were transmitted live by the Greek Parliament’s TV Channel, bringing the discussion in the living room of every citizen who cares enough to watch and draw his or her own conclusions.

A recent pinnacle moment has been the testimony of Mr. Roumeliotis, former representative of Greece at IMF, who testified that the IMF has been offering training seminars to prominent Greek journalists, in order to beautify its image. He also testified that prior to his testimony he received a phone-call by Mrs. Lagarde reminding him that IMF officials enjoy legal immunity.

On Wednesday, June 17th 2015, the Committee presented its preliminary findings to the Press. The findings will subsequently be translated to Greek and submitted to the Greek Government. By petition of 49 SYRIZA deputies, they will also be presented to the Greek Parliament for discussion.

You can read the entire executive summary of the report in the following link:

According to the Greek mainstream Media, the Speaker of the Parliament has exhibited excessive zeal and is pursuing personal promotion. They have often tried to depict her as someone who acts independently, beyond the control or the consent of prime minister Alexis Tsipras.

There has been a series of personal media attacks orchestrated against her, often with blatantly insufficient or even contradicting evidence. Among other things she has been accused with “abuse of power” because she asked the police not to block access of citizens to the Parliament during a demonstration.

Notably, Tsipras was absent from Wednesday’s presentation. Nevertheless, there is no tangible indication of the prime minister being displeased by the Speaker’s actions, so far. Strategically, her well-founded and highly institutional activities offer him an advantage, perhaps one to be utilized at a later stage.

Moreover, she expresses a big part of the party’s followers and deputies, who lean towards a more aggressive tactic. That opinion can be attributed to most Greeks, of all party denominations.

Returning to the report itself, there are certain points which stand out.

[…] the unsustainability of the Greek public debt was evident from the outset to the international creditors, the Greek authorities, and the corporate media. Yet, the Greek authorities, together with some other governments in the EU, conspired against the restructuring of public debt in 2010 in order to protect financial institutions. The corporate media hid the truth from the public by depicting a situation in which the bailout was argued to benefit Greece, whilst spinning a narrative intended to portray the population as deservers of their own wrongdoings.

The co-conspirators continue to this day to use the same arguments, five years into the detrimental austerity policies which have left the country with almost no hope for recovery, for decades.

[…] It concludes that the increase in debt was not due to excessive public spending, which in fact remained lower than the public spending of other Eurozone countries, but rather due to the payment of extremely high rates of interest to creditors, excessive and unjustified military spending, loss of tax revenues due to illicit capital outflows, state recapitalization of private banks, and the international imbalances created via the flaws in the design of the Monetary Union itself.

The flaws in the design of the Monetary Union have ceased to be a taboo among esteemed economists who now openly criticize its planners, even in the mid-90’s context.

Furthermore, the claim of the EU that Greece “cheated” by presenting fake data in order to be accepted in the Monetary Union, is no longer a convincing argument. It is common knowledge that everyone was aware from the beginning that Greece should not enter the euro-zone and everyone simply chose to look the other way. Corruption is endemic to the EU, no matter how much we try to hide it under the rug.

[…] the first loan agreement of 2010, aimed primarily to rescue the Greek and other European private banks, and to allow the banks to reduce their exposure to Greek government bonds.

Saving the golden bonuses of irresponsible bankers and nefarious hedge fund managers while placing the burden on the European tax payers, packaged with a tinge of solidarity and positive thinking, for the masses.

Debt to the IMF should be considered illegal since its concession breached the IMF’s own statutes, and its conditions breached the Greek Constitution, international customary law, and treaties to which Greece is a party. It is also illegitimate, since conditions included policy prescriptions that infringed human rights obligations. Finally, it is odious since the IMF knew that the imposed measures were undemocratic, ineffective, and would lead to serious violations of socio-economic rights.

Similar assessments are contained in the report regarding all other parts of the current Greek Debt (ECB, EFSF, bilateral, banks etc).

It is certain that invoking the report will signify open financial war between the Greek government and its lenders. This is precisely why the officials conducting the negotiations so far have chosen to distance themselves from the Committee and its findings. Depending on the outcome of Monday’s Eurogroup, that position may change drastically.