In an effort to pressurize the public to vote yes in the upcoming referendum employers cast threats in the form of suspended salaries, lay-offs and unpaid days-off work. Moreover many employers expect workers to attend  pro-austerity rallies and warn with future lay-offs in case ”NO” prevails in next Sunday’s referendum.

The radio station stokokkino.gr reported the case of a pharmaceutical company employee whose manager demanded that all workers attend the pro-austerity ”YES” rallies organized by the MenoumeEvropi* campaign. The YES rallies have taken place at Syntagma Square in Athens and attract an upper class conservative crowd whose financial interests lie in the European Union and its policies. StoKokkino reported that managers in the company, whose brand name was not published but journalists are willing to disclose, urged employees to gather at the office beforehand so they could all march to Syntagma Square as a group. Managers threatened that those not attending would be laid off. 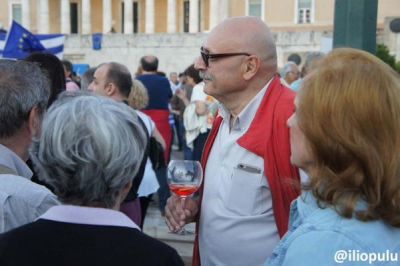 According to AthensIndymedia these incidents are common across a broad range of sectors: construction, the food industry, sales, and tourism are all using these tactics in order to create a climate of fear among workers. Geosystems has ordered employees to take unpaid leaves of absence starting tomorrow, while YEK Terna has put off four major projects and Nokia is openly pushing workers to vote YES. Viannex (by Giannakopoulos) has suspended salaries despite the fact that businesses are not affected by capital controls as online transactions are permitted. So far the Employment Inspection Body which is the competent organization in investigating these incidents and the Institution of Social Security (IKA) have not acted upon these allegations, but unions have received a number of complaints.

This adds up to the immense psychological pressure experienced by many employees at a time of extreme financial and job insecurity as the alarming unemployment rates translate to 1.5 million unemployed people across Greece. Workers denounce these actions and declare that any effort to instill fear in order to affect the outcome of the referendum equals to terrorism.

Threats, manipulation to vote YES, suspension of salaries – despite them being electronic transactions- and lock outs. Companies and employers, even competing businesses, have all colalborated to create a general climate of terror.    (Athens Indymedia) 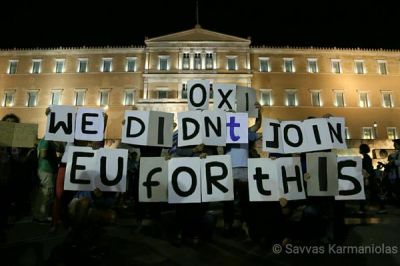 Syriza’s Department of Employment Policy made the following announcement today:

Every day we witness an increase in reports of employment terrorism and blackmail pushing people to vote ”yes” in the upcoming referendum which will be catastrophic for the country and its institutions.

According to official complaints many employers are threatening workers that they will not get their salaries or will be fired and in many cases these threats are made to force people to show up at ‘YES’ rallies.

This is the culmination of a series of extreme arbitrary actions taken by employers that have intensified in the last few days with the use of compulsory days-off work, suspension of salaries and job rotation measures.

These incidents are attempts to terrorize and manipulate the people of Greece on the part of the E.U. leadership, the domestic troika and the systemic/mainstream media which aim to continue the catastrophic memoranda policies that have led to 1.5 million unemployed people, 3 million people living below the poverty line, the dismantlement of the welfare state and selling out public property.

A call for action against terrorism of employment was announced yesterday calling all people to protest at the headquaters of the ”Association of Businesses and Industries” at 6 o’ clock on Wednesday.

*Menoume Evropi is Greek for ”We are staying in Europe”