Days before before the upcoming memorandum in Greece, employers have adopted tactics of intimidation in order to create panic and fuel financial insecurity among workers. At the same time many employees are explicitely threatened with possible lay-offs in case they don’t go to rallies organized by the right wing in favour of YES.

According to 902.gr, Inditex which is composed of the brands ”Zara”, ”Pull and Bear”, ”Bershka” and ”Ousho”, has given unpaid time-off to all employees, while ”Notos” workers received only half of their salaries and were not informed when they will get the remaining amount . In ”Sklavenitis” and ”Vassilopoulos” employees are being asked to suspend their holidays and days off. According to the same source ”Newsphone” employees were called to enact a telephone campaign in order to influence the public to attend campaings promoting YES. The employees filed a complaint with the Union of Telecommunications Workers and Employees in Attica. The Union, among others, announced the following:

We call on all workers not to become a part of the YES campaign and not to give into blackmail and terrorism. 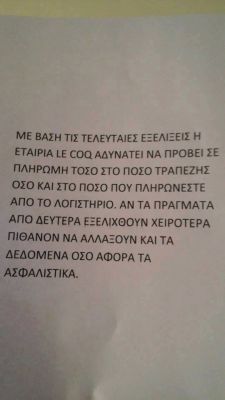 Leaflet mentions that ”Based on recent developments the company Le Coq cannot proceed to making any payments regarding your salaries-the amounts you receive through banking and the accounting office. If things get worse from Monday, changes could be implemented in insurance policy”.