After Lesvos resident Eric Kempson reported the harrassment he experienced by the police who blatantly warned him against helping out refugees, another example of volunteers being targeted by local authorities was reported on Saturday, 4th of July, as two women were arrested for helping refugees get to their destination on the island.

A woman was arrested on Saturday morning for helping undocumented migrants reach Myteline, the island’s capital. Typically, the nine people who entered the country without permit on Friday night, would have to walk all the way to the port registration office since there is no transportation available. Depending on the point of entry sometimes the distance equals to 70 km. The refugees are forced to hike in the exhausting summer heat and unless they are provided food and water by volunteers, who risk being arrested by the police or harrassed by rightwingers when they do so, they must walk on an empty stomach. The serious lack of properly equipped reception centres and transportation funded by the government is creating serious problems especially to the elderly, the children, the disabled, the injured and those expecting a baby. The 59 year old woman who is now arrested and facing felony charges, was caught transferring nine individuals in her car. The police is in the process of conducting preliminary investigation.

The local newspaper Lesvos News described the 59 year old as a caring activist:

The woman is well-known around  the island for her contribution to the refugees. How can you not give people a lift when you see them walking and carrying babies and children under the hot sun? The police and the coastguard must tone it down a bit… there are criminals elsewhere for you to arrest.

According to @blacktom1961 another woman was arrested for giving a lift to a pregnant refugee and her children on Saturday. The hearing is scheduled for tomorrow at the local court.

I’m repeating once again that the police is acting arbitrarily as activists with legal expertise have already pointed out in a recent announcement.

We are citing an incident mentioned in Philippa Kempson’s facebook page: 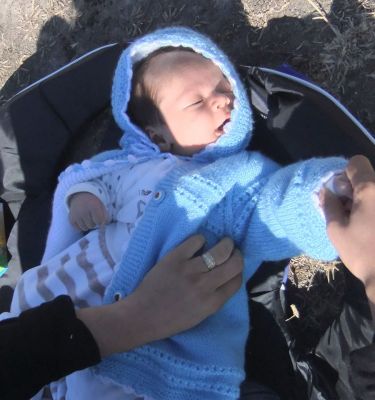 A few days old!!!!!!
Arrived two days ago, arrived very wet and very cold. We did what we could to help but like all new arrivals they face a very long road ahead. Two nice ladies stopped and gave them a ride, hoping to take them to Mytilene, they were stopped by the police before they reached Kalloni and the family were evicted from the car and told to walk!!!! The two tourists were reprimanded but not arrested by the police. This left the family with approximately 50km left to walk!! ABSOLUTELY INSANE!!!!

As the vengeful behaviour of the authorities is becoming more and more common and the situation is getting completely out of hand, humanitarian organizations and activists alike must act immediately, because people’s lives are in danger. During the weekend a young Afgani woman suffered injuries as a result of a car accident because of the complete failure of the Greek government to provide safe transportation. Refugees are in a very vulnerable state and require protection. The government has to respect their rights at last.

Beyond Eidomeni: human warehouses and squalid conditions in Chios and Ritsona

I believe there is transport available but the authorities are forbidding its use to transport refugees. Buses were used initially until this facility was stopped and well intentioned locals were threatened with arrest if they performed humanitarian acts, as has happened in this case.

i didn’t mean lack of transportation altogether but for the specific purpose of transferring refugees to the authorities/shelter. I was not aware that there used to be buses? Do you know why this service has stopped (especially now)?