After Golden Dawn’s leaders were arrested, in September 2013, we witnessed the battalions retracting, the racist attacks drastically decreasing and their intensity becoming milder. In 2013, the Network for Recording of Incidents of Racist Violence recorded 166 racist attacks with at least 320 victims, while in 2014 these incidents were reduced to half, with 81 attacks and more than one hundred victims.

Nevertheless, in 2015 and specifically as the beginning of the trial was approaching, we witnessed a small but noticeable increase in racist attacks. We witnessed organized assaults from battalions and solitary perpetrators, while the targets were immigrants, young people with a “different” appearance and it was transgender people who suffered the most brutal attacks.

Efsyn.gr records these incidents of racist violence, as they were reported by organizations against racism and as they appeared in the newspaper. With the trial in mind which continues today, we attempt to interpret this increase.

The chronicle of fascist violence 2015

January 1st: Intrusion to a guest house for underage refugees with a gun and racist slurs in Oreokastro, Thessaloniki. The perpetrator was  the former president of the Alexander Technological Institute of Thessaloniki.

January 25th: Attack against members of Syriza and Antarsya (a small leftist political party) in Keratsini outside a school functioning as a voting station.

January 29th: Brutal beating of an immigrant woman from Bulgaria in Istiaia, Evoia. Her employer and his friends tortured her and left her bleeding on the side of the road.

January 31st: Forty neonazis attack young people at the metro station Evangelismos after a meeting of Golden Dawn for Imia.

February 9th: The Movement Against Racism and the Fascist Threat denounces the horrific attack against an immigrant in Rhodes. The man was unconscious and when he regained his consciousness he was in a lot of pain and there was blood coming out of his rectum and during his transfer to the hospital pieces of broken glass were removed. 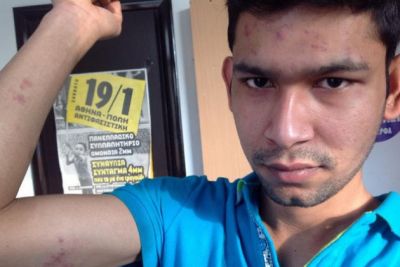 February 22nd: Violent racist attack against Naveet Ashraf who was riding his bike in Kalyvion avenue by a driver 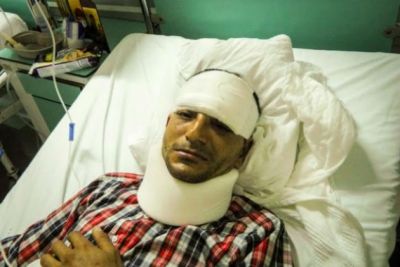 Feb. 25th: Verbal, racist attack by a patient against Dr. Solace Godwin, who is also a member of the Anti-nazi Zone, in Mamatsio Hospital in the Kozani.

February 28th: Homophobic bullying against a 19 year old, on Alexandras Boulevard, Athens, from passengers on a black SUV. 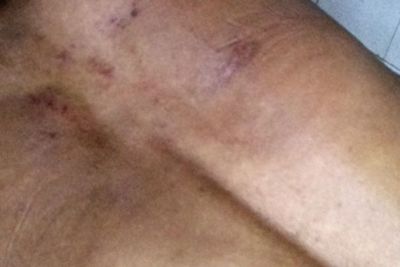 March 8th: violent attack against a Bangladeshi man named Mohammed in Pangrati district. The attacker was male, he used a club and started hitting the victim’s head on a tree.

March 11th: a new case similar to that of ”Manolada” was revealed in a bird farm in Chalandritsa, Achaia.

March 12th: Five people were arrested for pretending to be police officers in order to get into immigrants’ houses, assaulting the victims and stealing their possessions. This crime took place in St. Panteleimon district in Athens.

March 14th: An attack against a university student in Piraeus, outside the Savoy hotel where a conference of the Golden Dawn was held. 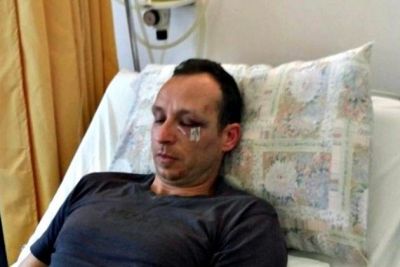 March 25th: Murderous attack in Chania from a Golden Dawn battalion against Dr. D.Makreas, as he attempted to protect immigrants. 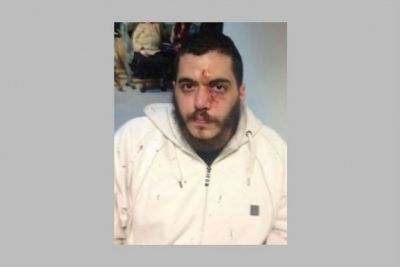 April 20th Attack against witnesses of the civil party on the first day of the trial of the Golden Dawn.

May 1st: An aggressive attack using a knife against a transexual, in a cafe-bar in Psachna Evias, from the owner of the bar and another five people, one of which had a swastika tattoo on the back of his neck.

May 5th: a seven-member battalion lashed out against Mahmood Shaff and Rauff Talat from Pakistan. The two immigrants were attacked with  knives and clubs. The victims reported that the same fascist group had previously attacked them another five times in the past.

May 5th: The autonomous centre Resalto reported a racist attack against a man named Adnan of Pakistani descent. The four perpetrators used brass knuckles and a metallic crowbar to attack the victim in People’s square, Keratsini.

May 9th: An attack of intimidation against the residence of Walid Taleb in Salamina was reported.

May 15th: An attack in New Ionia with a sharp object against an immigrant was reported.

May 20th: ”Nosotros” reported an attack against a transgender woman in Exarchia square.

May 21st: An attack using a hunting gun against a transgender woman in Larissis station, close to the office of the Golden Dawn, by a man who shot her on the legs, thighs and close to the genitals.

February 24th – June 6th: At least 11 incidents of vandalism against autonomous centres, places of social solidarity, properties of immigrants and monuments, most characteristic of which was the desecration with swastikas of the monument of Pavlos Fyssas in Keratsini.

Thanassis Kambayiannis, lawyer of the civil party in the Golden Dawn trial 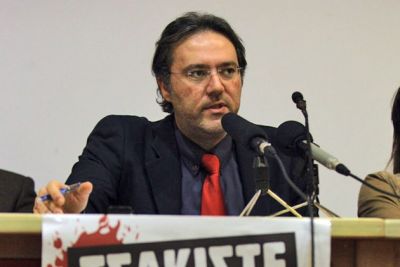 “The drastic decrease of racist attacks after members of the Golden Dawn were arrested is further proof that vast majority of attacks we witnessed the previous years were centrally organized. The decrease on the one hand means that the organization is afraid of being indicted and retracts the battalions, therefore they are no longer guided by the core of the Golden Dawn. On the other hand it is a result of the message sent to every aspiring criminal that it is not possible to commit a crime and remain unpunished”. Mr Kambayiannis explains that retracting the battalions does not mean that the Golden Dawn is transforming qualitatively into an organization and thus becomes a “legal political party”.

“It is clear that the attacks are continuing and are now done by members of the Golden Dawn guided core group, but now their criminal activities are much more selective and aim at sending a message externally, to their enemies, that the strike teams are still there, and internally that the Golden Dawn has never stopped having this power and has never stopped having these targets” he stated. He also highlighted that “what is now absent is the critical hub of the battalions which, in fact, used to orchestrate all these attacks centrally and was giving them features of power and mass participation”.

“This does not exist right now and this is relevant to the development of the trial. Therefore, we can now assume reasonably that, if the leadership and members of the organization are found innocent or even treated with lenience, this will mark a severe increase in racist violence again”. 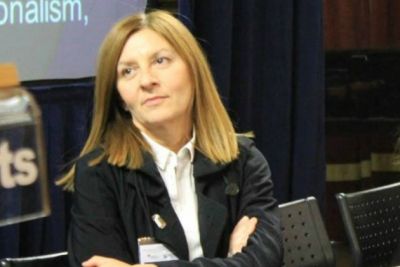 “During the time when the Golden Dawn was in the spotlight, we watched their criminal actions and their connection to nazism and, as a result, the organization’s activities were diminished. Had they not done that, they would have confirmed everything they were being accused of by the public and the media. Now, while they are no longer in the spotlight, they are not the centre of attention and the trial is not systematically covered by the media, the organization is going back to the way it used to act always, and this is the form of ‘violent activism’”, said Vasiliki Georgiadou. She added that because of the way the trial proceeds with intervals – which is resulting to not having moved forward to the essence of the case – and the way it’s proceeding, inside an unsuitable courtroom in Korydallos and away from the city centre, this is interpreted by the Golden Dawn as “cowardice on the part of the state or lack of will to focus on the case. This gives them an edge”.

She also added that the way the organization is treated by the political regime and the government in the Parliament also gives them an edge.

“Is it acceptable for the minister to stand submissively and provide Ilias Kasidiaris with an answer? Is it acceptable that the Speaker of Parliament is fighting battles regarding the legality of legislation passed when remanded members of the Golden Dawn were not present? All these are giving points to the Golden Dawn. They are giving prestige to the organization. They are passing across a message to the public saying specifically that we are not dealing here with members of a criminal organization” she says and interprets this stance on the possibility of a logic that aims to lure away the voters of the nazi organization.

Concluding, she explains that the Golden Dawn is presently working on its “violent activism” to send a message that they are still here, politically and organizationally, and she thinks it is possible for their electoral success to have given rise to other far-right extremist groups with public presence. 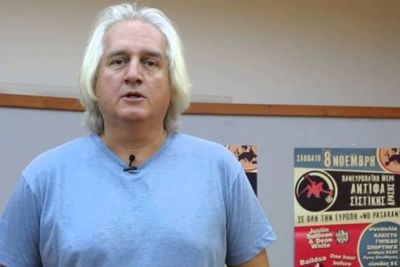 “According to the reports in the Journal of Fascist Attacks that is put together by the Anti-nazi Zone, we witness a partial return of the battalions. They are not operating on the level they did two years ago, but their operations have increased in comparison to the previous period” says Giannopoulos.

“Overall, Golden Dawn is attempting to show its presence with public interventions and public gatherings. The attacks against immigrants and transgendered people are on the rise since just before the beginning of the trial and, while the trial proceeds, they remain on the same level. An interpretation is that Golden Dawn is trying to recover and to rediscover the causes of its rise. The organization considers that violence is rallying its voters. 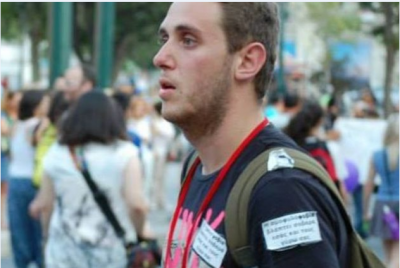 LGBTQ community Colour Youth in Athens recorded 60 incidents of transphobic and homophobic violence during the first 6 months of 2015.

“The victims are no longer staying silent, instead they are determined to speak up”, says Konstantinos Pantikiou. “We have been recording approximately 10 incidents per month, however in May there were 14. The only thing sure is that there is an upsurge in the frequence and intensity of violent attacks. According to facts, violence increases when there are ‘multiple motives’ such as sexual orientation and disability, nationality or gender identity”.

He’s dead but they are still afraid of him… 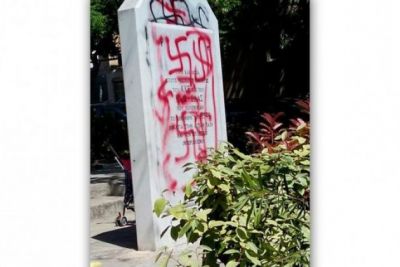 Twice in three months’ span, unidentified perpetrators desecrated the monument of anti-fascist musician Pavlos Fyssas with swastikas and nazi symbols. The monument is in Keratsini and was created by Stathis Alexopoulos. Local residents were shocked to find the monument of the 34-year-old, who lost his life after Golden Dawn member G. Roupakias stabbed him to death on February 18th 2013, covered in red swastikas.

Soon as the mayor of Keratsini was notified, cleaning crews were sent over to clean the sculpture.

It’s noteworthy that the monument was desecrated again in February, when fascists sprayed swastikas and wrote fascist slogans, signed by “C-18”, which is the signature of the British neo-nazi organization “Combat 18”. Combat-18 has been accused of perpetrating a series of murders of immigrant people and citizens with a darker skin tone.

A few days later, the nazi gang “Combat-18 Hellas” claimed responsibility by a text posted on their blog.

#Gdtrial: The forensic tests of the most significant evidence in the case of the murder of Pavlos Fyssas are now ”missing”