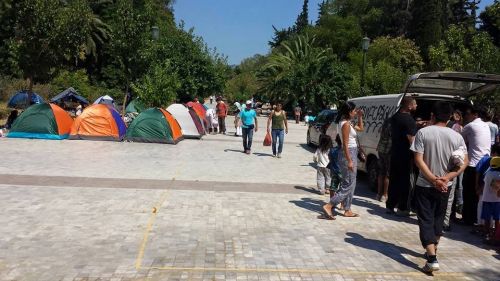 A humanitarian crisis is unfolding in the Pedio Areos park in Greece. The indifference of the authorities is a crime.

Over the last couple of days hundreds of refugees – in their majority families with small children- have found refuge in the Pedio Areos park in the center of Athens. People, haunted by wars and poverty, desperate, caught within the internal walls of Europe, helpless and persecuted by the Greek and European authorities.

All anti-migration reflexes of Europe and Greece are currently reflected in the humanitarian crisis which is unfolding in Pedio Areos. If the refugees are lucky, and do not drown in the shipwrecks caused by the Fortress Europe that FRONTEX is creating in the Aegean sea and the Mediterranean, if they are not being collected during one of the “round-ups” performed by the Greek police in order to be “hosted” in concentration camps or hellish basements of police precincts, they end up homeless, helpless and hopeless in the city-parks and –squares.
While the flow of refugees from warzones (like Syria and Afghanistan) to Europe is increasing constantly, the anti-migration policy of Europe and the Greek state, and their indifference when it comes to protecting the refugees and their immediate needs, creates phenomena like the one in Pedio Areos. 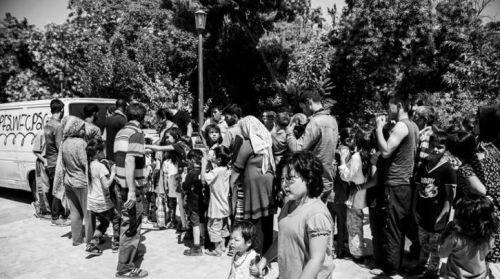 The camp in Pedio Areos is not the solution; we call upon the authorities to take immediate measures for the protection of the refugees and to cater for their immediate needs and their rights.
Being a refugee is not a crime, indifference for human lives under threat is!

Athens: Building Occupied for the Accommodation of Refugees