Police officer holding a knife slaps refugee on the face

A police officer threatened migrants’ lives when he started waving a knife in plain sight in Kos island, Greece. The racist attack took place yesterday at the local registration office and although nobody was injured, a refugee was hit on the face and a few more were violently pushed back as the officer exhibited worrying signs of aggression and inability to contain his unprovoked rage.

The officer displayed a bullying attitude against the migrants who were waiting to check on a names’ list in order to find out whether their immigration documents had been issued.  ”What did I tell you? What did I say? What did I say? What did I say?” the officer shouted repeatedly in Greek and moved towards the crowd of migrants with a knife in his hand. The attacker was waving the knife and forcefully pushing back the people standing at the front who seemed confused, since they could not understand what the man was saying and shocked from all the mistreatment. The officer also hit one of the men on the face.

Things did not get out of hand as a result of miscommunication or an effort to get people in a queue. This was a display of power, a violent act of repression because people did not ”follow orders” in a language they could not understand, a manifestation of institutional racism exemplified in the abusive behaviour against people who were not born in the country which, ironically, prides itself for being ”the cradle of democracy”.  The officer treated the migrants degradingly as if their lives were unworthy of respect, as if the public space outside the building were his own territory and his authority was not to be challenged, as if his unprovoked acts of aggression were completely justified and normal.

This issue reveals tense race-relations ascribed to xenophobia and strong nationalist sentiments that permeate the social fabric of the local society since, uncoincidentally, the attack described above was not the exception but the rule. In May a hotel that was used to house refugees in Kos burned down, however, the cause has not been identified yet by the local fire department. During the same month, Elias Kamateros who happens to be a Syriza MP was receiving threatening phone calls during which he was told that his house would be burned down for making arrangements for refugee housing.  A few days ago, a group of extremists appearing as mindful citizens expressed their intention to organize patrols in order to keep refugees out of the city, citing an unverified attack against a local couple as an excuse that necessitates these ”measures”. The language used on the facebook post was utterly dismissive and demeaning, calling the migrants ”animals that want to be called human”.

Today, hundreds of refugees dealing with homelessness and deprivation staged a sit-in and blocked one of the main roads of the island in order to promote their demands for legal documents and food. Mainstream media reported an alleged fight that broke out among migrants before a police intervention dissolved the crowd during a vehement attack with fire extinguishers and batons. The Syriza-Independent Greeks administration has once again resorted to repression as a means of dealing with urgent social issues caused by inequality, racism and marginalization, a precondition that is conducive to the problem of criminalisation of migrant populations and the act of protest. The government’s decision to transfer riot squads on the island this afternoon shows how refugees are treated like common criminals despite the abuse, the constant violation of their rights and the extreme poverty they experience. At the same time, tensions that can possibly erupt among migrants are created by the lack of housing, food, effective services and psychological support that must be provided in order to cover the essential needs of people fleeing war zones. 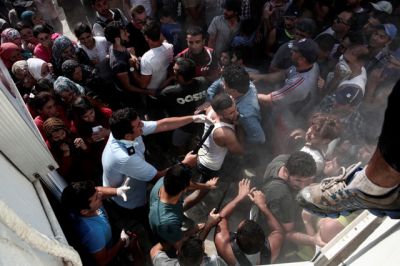 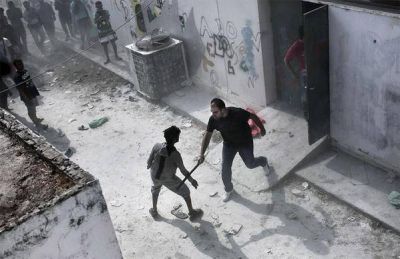 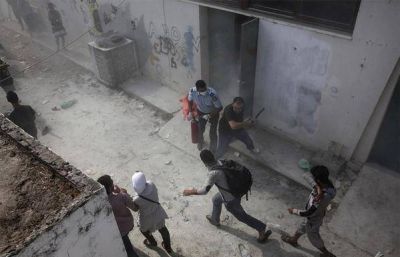 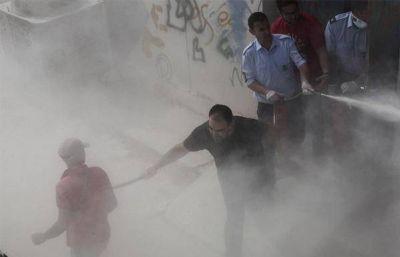 The government has been unable to provide any support to refugees arriving on the coast of Greece. In various cities across the country people in solidarity take on the task to look after refugee families and unacompanied minors that often find themselves in a hostile environment. Despite these difficult conditions and the danger posed by racist individuals and institutions, there are also groups of activists who are doing everything possible in order to express their solidarity and support. An example is the group of solidaritarians that provide medical support daily, prepare three meals a day, organize leisure activities for the children, provide clothes, shoes and medication and created collection points for donations in different parts of Athens, as an active form of solidarity with refugees camping in a central park in Athens (Pedion Areos). 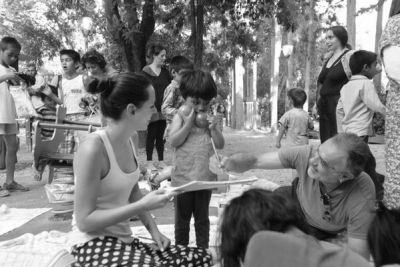 Concluding, the police has ordered an internal investigation regarding yesterday’s attack and the officer has been temporarily suspended but the country has a long history of impunity for violent crimes commited by the police. The lack of educated and trained staff who would have been able to provide assistance and support to refugees and the deployment of riot squad to contain tension  caused by insecurity, fear, homelessness, trauma and hunger is a shameful and reprehensible act on the part of the Greek government and the E.U..