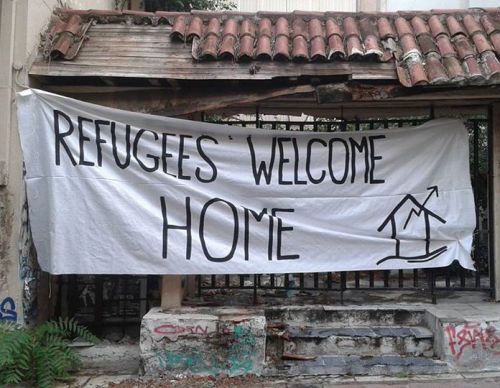 
Driven by the latest developments on the issue of refugees and immigrants, we took the initiative to occupy the old student restaurant at 44, Arachovis Street in Exarcheia, with a view to use it as a structure for the accommodation and self-organisation of immigrants and refugees. This initiative is a way to respond to the current political developments and to expand the practices of intervention and communication on immigrant communities and refugees by the movements.

The transit of a large flow of refugees through the European continent has to a large extent succeeded in tearing down the regime of European Union’s borders and the legal effects of the infamous Dublin II Regulation. Despite the police brutality, suppression, fascist raids and racist hatred we witnessed in the past time (particularly in Greece, but also in other countries), the wide social wave of refugees has managed to crack the iron-clad totalitarian construction of European borders.

In this context, we took the initiative to occupy this accommodation space, driven by intentions that are far from being charity work or an easily digestible kind of humanism.

We want to occupy the terrain that will enable refugees/immigrants build their own structures that will secure their survival and will help them meet their basic needs.
Second, this move will be the spark for a new prospect: through the practices of self-management and self-organisation, we intend to create efforts that will resist the dominant model of social relations, responding directly and tangibly to problems and social needs.
We aim to connect with similar movements all throughout Europe and Greece, to create a broad and dynamic centre for the organisation of refugee and immigrant communities, to make the trip of refugees to their survival a trip of humanity to freedom.

FREE ACCOMMODATION FOR ALL

FREE MOVEMENT FOR ALL

CITIZENSHIP TO EVERYONE THAT WISHES IT

ASYLUM TO ALL ASYLUM-SEEKERS

A humanitarian crisis in the center of Athens ‪#‎pedion_areos