An effort is being made to disrupt the communication between prisoners with their loved ones as well as the flow of information that guides collectives, solidarity movements and campaigners to initiate actions in solidarity with prisoners’ rights and struggles behind bars. Squats, banners, demos, articles, are all integral aspects of necessary social action that breaks the silence and amplifies the reality in the country’s prisons so that it becomes visible for the rest of society, even those unaffected by incarceration and its consequences.

Since public opinion is shaped by mainstream media that serves the interests of large corporations, the content created by journalists is often in line with moral panics exposing ”dangerous” inmates that pose a great threat to society and any perceived ”social order”. What the middle class always defined as ”social order” was merely a reflection of its privilege of safety and financial independence within the artificial environment of the ”suburb”: a space away from the reality of inequalities and social struggles. The newly impoverished middle class has now got to reconsider this since it became troubled with the same problems the working class has been struggling with since the beginning of modern society.

High-tech televisions, fans, refrigerators and cooking utensils, they even have cable… Everything is photographed and posted on Facebook! (…) Ofcourse photos of prisoners holding knives and bullets are not missing, they probably want to send a message to the outside world. Excerpt from article by Lefteris Bindelas on Ethnos newspaper

Communications professionals construct the narrative of ”dangerous prisoners” to absolve the real perpetrators of the crimes against the working class and to soften the public image of politicians and capitalists, to instill fear that reinforces a ”need for protection” and thus implementation of stricter conditions of incarceration without any objection from the public, to isolate and stigmatize solidarity movements and human rights supporters from the wider society, to abate the rage against the system by those suffering the consequences of austerity willing to misplace their anger towards prisoners, since it’s not prisoners that will have them evicted from their homes creating unprecedented rates of homelessness, nor is it prisoners that have them work 12 and 14-hour daily shifts for next to nothing.

The powerless can only ”become” a threat through a distorted perception that they possess some sort of power that exceeds the confines of captivity and can cause great harm to society. Based on a notion of otherness constructed on photographs of men exposing impressive tattoos and flexing toned muscles, some carrying handmade weapons and others banners with political messages, this is a notion that goes far beyond the objectification of prisoners’ bodies and their representation and it has much wider socio-political implications, especially since the rise of Golden Dawn: incarceration in Greece is intertwined with racism and penal repression against minorities. Case in point: 59% of Greece’s prisoners are immigrants. The stigma born by incarcerated people intends to legitimate a racist value system which in the era of the penal crisis of modernism characterized by an escalation of austerity, contributes to social intolerance and marginalization for migrants and creates unsfafe spaces for them while it provides a power boost to the far-right. 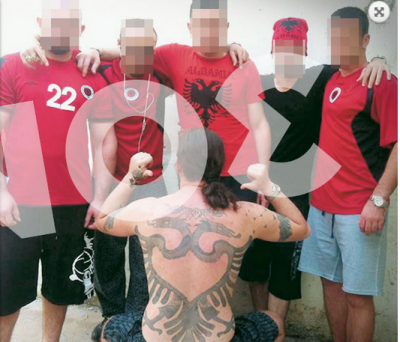 Last but not least are Greece’s anarchist prisoners who were singled out during this smear campaing and treated with despicable vengeance by the press. People who were forced to endure disproportionate sentences, subjected to extreme security surveillance and faced abductions, solitary confinement and assaults by the police, facts consistently under-reported by mainstream media owned by Greece’s plutocrats. These are the people who put their lives on the line for the betterment of the prison system and staged hungerstrikes to achieve legislative changes improving conditions of incarceration and release of remanded family members. They were forced to witness the criminalization of female relatives, who as a result are now facing similar charges as the defendants, despite complete absence of incriminating evidence: Maria Theofilou, Athena Tsakalou and Evie Statiri have been systematically targeted by the authorities and the media.

Evie and Athena are currently released but face severe restrictions which are especially detrimental for Athena who needs medical tests to monitor her health. Both women are under house arrest, while Evie is allowed to move within a 1km radius around her residence. These restrictive terms of release mean that they will not be present at their trial unless the ban is lifted by judicial authorities that so far seem reluctant to take action. Maria’s children had to go through the trauma of having guns pointed at them while their father, G. Petrakakos, was arrested; as if this was not enough on the same day their mother’s mugshot leaked all over the national press. Evidently, the authorities had absolutely no intention to safeguard the well-being of these children nor their vulnerability to this harmful and traumatizing situation was something that was taken into account by officials. Yet their trauma was a means to inflict a psychological form of  torture against the family’s adults who were unable to provide any protection or support to the children because of their subsequent arrest. We see once again, as Loic Wacquant theorized, that neoliberal penality is synonymous with vengeance which is distinctly prominent in cases where individuals are accused of politically motivated crime.

So, these are the ”evil”, the ”out of control”, the recalcitrant, the deviant, the disobedient and the insurgents housed in Greece’s notorious prisons, men and women that above all are human beings entitled to legal rights, respect, dignity and freedom. Tactics of cultural repression such as smear campaigns, public humiliation and social stigma that aim to intimidate prisoners, their families and campaigners are systematically deployed by Greece’s oligarchs who exert absolute control over mainstream media. Penal repression is inextricably tied to trauma, human-warehousing and social inequality primarily in the form of race relations, subordination of the working class and marginalization of non-conforming gender identities and sexual orientations and intends to establish the dominance of capitalist hierarchy: unequal distribution of wealth, privilege, elitism and cultural capital in favour of the ruling class. The judicial authorities in Greece, in collaboration with domestic media are amidst a well orchestrated campaign of public misinformation reinforcing an understanding of the prison phenomenon from a penal perspective overshadowing the social conditions that created and maintained this inhumane institution.

Following is a relevant statement from Outlaw Report

Mega TV and Ethnos newspaper have once again taken on the task to carry out a media campaign promoting the political agenda of the domestic law and order adherents in the field of penal repression and rehabilitation. As a way to ensure this they put forth the necessity of creating more strict conditions of incarcerration, when, in fact, a few days earlier the damning report of the E.U. Convention for the Prevention of Torture and Degrading Treatment was made public.

This time new discoveries were made by journalists representing the interests of media mogul G. Bobolas, who revealed that in 2016 not only prisoners have the right to communication, but also, have illegal possession of mobile phones that are so high-tech they have cameras and internet access.

What is intentionally not revealed is that the Penal Code provides for the communication of prisoners with their extended social environment and acknowledges that this has to be on the same level as free citizens, since it can affect re-entry to society in a positive way.

It is a fact that the outdated Penal Code that came into force in 1999 did not provide for the use of mobile phones and the internet, since their use was not as popular back then as it is today and not as necessary. In fact, even if the use of the internet is not provided by the penal code it surely is in line with the spirit of law.

Another piece of information carefully left out by journalists, who made degrading comments and condemed the use of social media by prisoners, is the bad condition of pay-phones in prison, another consequence of the financial crisis and insufficient state funding. When pay-phones are out of order they never get repaired and as a result there are currently only 2 pay-phones per 300 prisoners.

Furthermore, the overcharged rates imposed on prisoners due to the monopoly established by the Hellenic Telecommunications Organization in prison that prevents the use of phone-cards from other companies offering cheaper rates, was again another aspect of the subject matter journalists chose to ignore.

It is hypocritical to report this type of misdemeanours such as illegal possesion of mobile phones in prison and it is at least sadistic to aim at depriving prisoners the one window of opportunity to contact the outside world, at a time when the internet is not some kind of luxury but an integral aspect of social life for all people.

It is also ridiculous to make a fuss about the current illegal status of the use of the internet in prison instead of starting a public discourse on the need for law reform to ensure that prisoners have access to the internet.