During the last week a public picture of lawlessness and destructive energy has been created surrounding the No Border Camp. For instance, Giannis Boutaris – the mayor of Thessaloniki – is concerned about the occupation of the Aristole University of Thessaloniki campus becoming a permanent space for a camp. Specifically, he is worried about „the hygiene, the security and the lack of protection for the private property that is inside the Aristotle University of Thessaloniki.“

This statement shows, that Boutaris as well as the director of the University, Pericles Mitkas (who made similar announcements), do not even try to understand why around 1000 of antiracist activists from all over Europe decided to be part of the Camp. „With statements like that, the global problem of international conflicts, closed borders and the European states’ practice of exclusion and isolation are being made invisible. If the officials are so worried about hygiene and security of people, it is remarkable that they never refer to the catastrophic conditions of refugees in the several centers in Greece. This is one thing we tried to gain attention for with our actions during the several days at the camp“ (Paul from Beyond Europe) 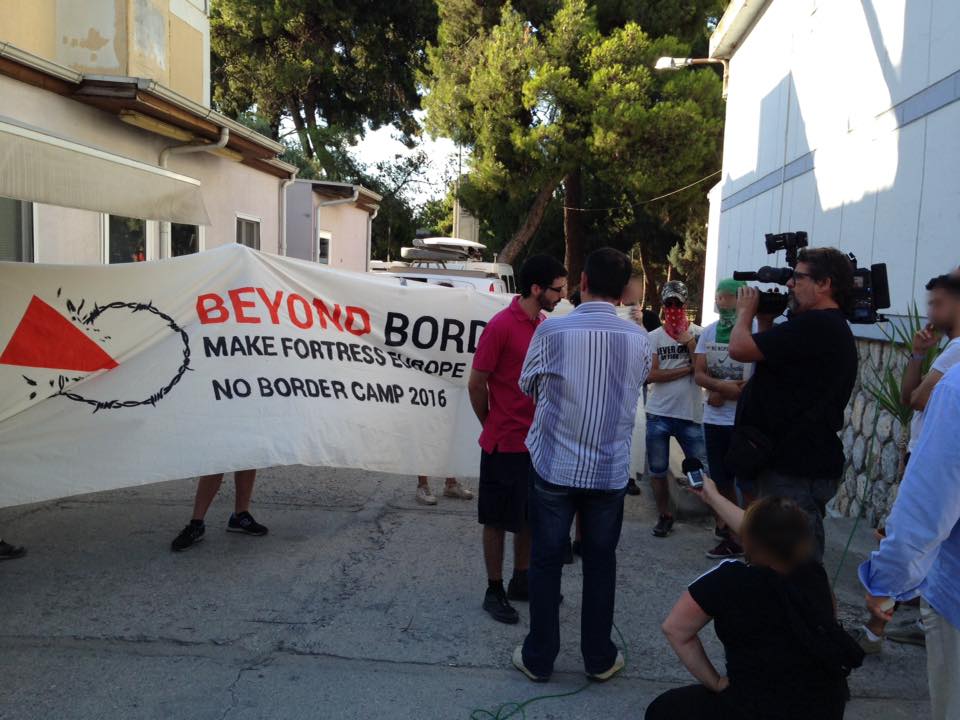 Since the gathering of several No Border activists on the campus, which has not even had a library for some months and is more used as a place for public drug selling, the situation has completely changed. „Together with refugees we were able to get a common place of solidarity to discuss the global problem of capitalism, racism and the border regime. Our visit with about 1000 people to the detention centers in Paranesti and Xanthi northeast of Thessaloniki made clear that state politics are nothing we can put trust in. Whilst Syriza promised one year ago to better the situation of refugees, it is now obvious that only a self-organised organization from below like the one created on the campus can solve the multiple problems which are produced by the capitalist world economy. It is time for an international initiative from below to form in order to tackle the current intensification of authoritarianism and border regime – being pushed ahead by the right wing or the so called „popular parties““ (Shendy from Beyond Europe)

Therefore different actions took place. On Sunday, the 17th July, out of a demonstration with 300 people 50 activists entered the state TV station ERT3 to give refugees isolated in different centers around Thessaloniki a possibility to speak about problems in their home countries but also about the disastrous conditions in the numerous detention and relocation centers in Europe but especially here in Greece. Also activists involved in the No Border Camp took the opportunity to clarify the political motivations against all the speculation and lies in local media. „Europe promises human rights, equality, safety and peace. But for many, especially those with no or only a handful of rights, the political and daily reality is a living nightmare. (Paul from Beyond Europe“) 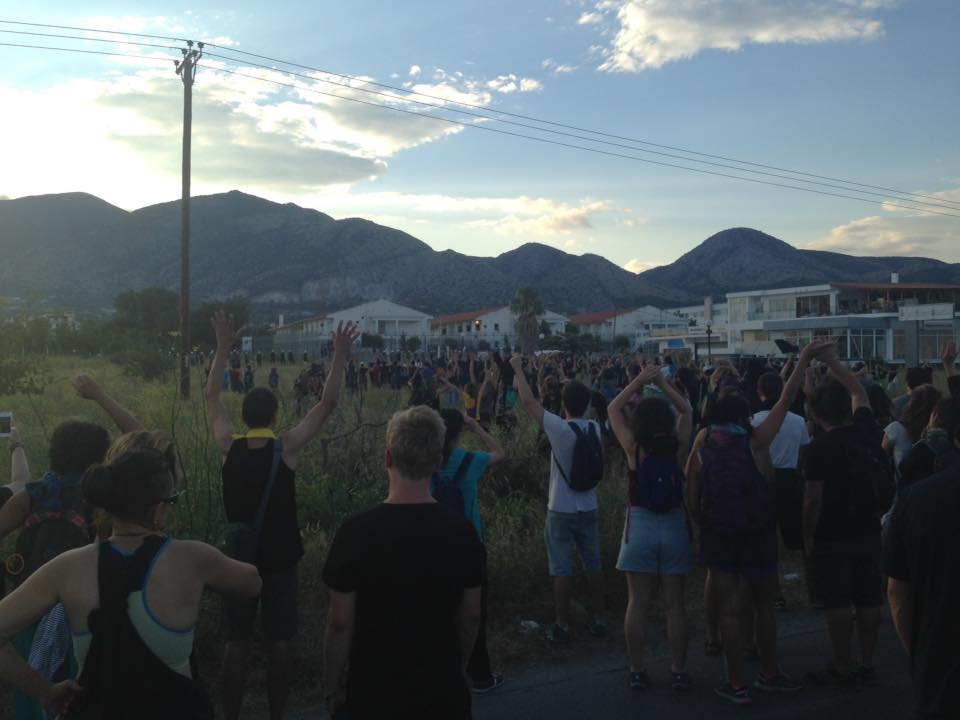 On Tuesday, the 19th July, we marked different actors of the the border regime of Europe like the German embassy. „After years of deadly, neoliberal politics to „solve“ the crisis in favour of saving capital built upon the backs of parts of the working class, excluded persons and migrants as well as refugees with a crucial influence from Germany, the German government became one of the most important actors for the deadly crisis regime in Europe. The latest EU-deal with Turkey demonstrated that these states are even willing to co-operate with antidemocratic dictatorships. Focused on the national economy, politicians like Merkel are willing to keep those migrants and refugees with no value to the national economy away by any means necessary. „On the „migrants pride“ demonstration on Thursday, the 21st July, we demonstrated with 5000 people that people go before profit. No-one is illegal.“ (Mustafa from Beyond Europe) 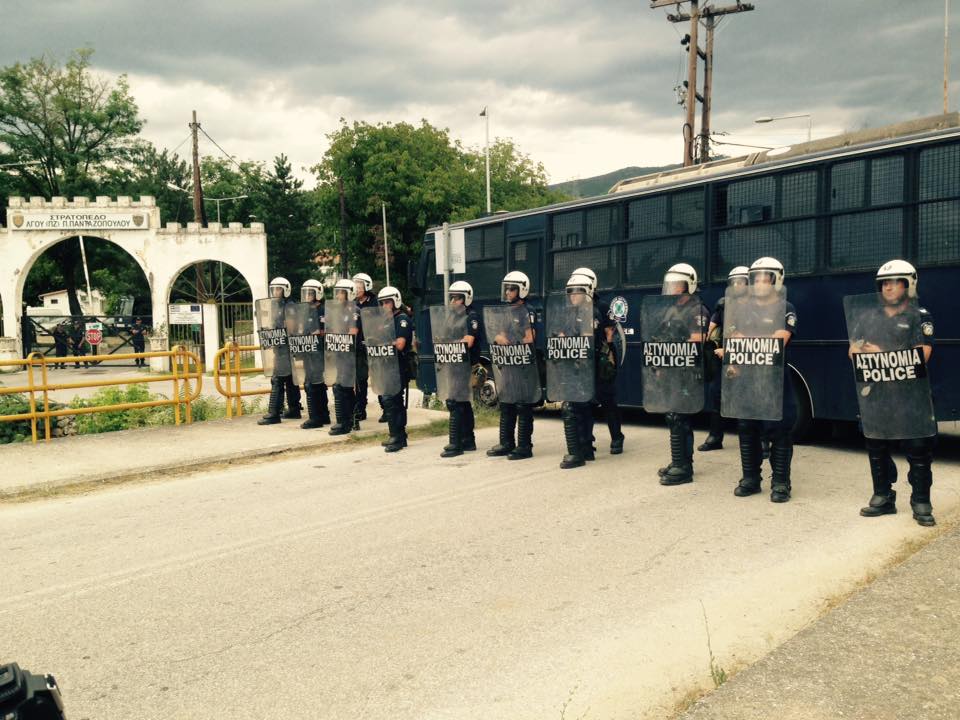 The latest occupation to create a social center for refugees happened on Friday, the 22nd July. „As we face problems which the Syriza-government do not want to or cannot fix, we have to take the daily organisation of our lives into our own hands. The creation of a common place in former empty houses to give refugee families housing is a legitimate tool to solve the problems governments all over Europe are not willing or able to solve. „Not an occupation is illegal. It is the deadly system of capitalist accumulation which creates the contradiction of empty houses on the one hand and families being forced to live in tents without privacy and security on the other. We have to overcome this system and we started this with the occupation of the university in Thessaloniki. Yesterday we continued this at the border village Kastanies at the Greek/Turkish border. Here over 300 activists took to the streets.“ (Shendy from BE)