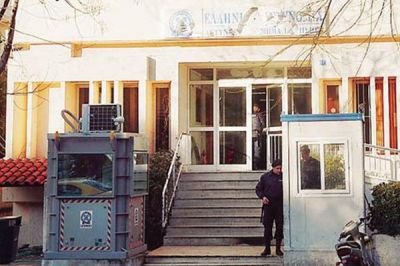 Open letter from the prisoners of Greek prisons to the jointly responsible ministers of public order and justice:

On the 3rd of August 2016, the recently released -and former co-prisoner of ours- Pëllumb Marnikollaj goes to Patisia Police Station to present himself before the relative authorities in fulfillment of the conditional terms of his release. Under up-until-now unexplained circumstances, he is transferred to Red Cross Hospital and, eventually, to the morgue. Shortly before being buried as of unknown identity – and despite the fact that his identity was known to the authorities- his relatives collect his corpse and allude to torture and defenestration.

We are not the ones in charge of judging on what really happened. However, the number of reasons, which we have, not to believe the version of the Greek Police equals to the thousands of prisoners found in Greek prisons. It’s not merely the clumsiness in the way police attempted to cover the incident up; neither the fact that their explanations go against any common sense (Come on, misters of the Greek Police. Who would believe that not only a prisoner, but even a citizen that visits a station to have his ID card issued would ever be allowed to roam around police offices, opening and closing windows undisturbed?).

We have every reason to believe the family’s version of the needless death of our co-prisoner because every single one of us has endured the atrocities that take place inside the interrogation offices of police stations. We might not have had a first-hand defenestration experience; however, plenty of us have been under its threat as form of a not at all uncommon method of interrogation. We have, also, all been surprised by the fact that the windows of police stations are adorned with “flower boxes”.

That we draw up this letter and make it public does not at all mean that we have the slightest hope for an investigation or that those responsible will eventually be held accountable. It’s already straightforward that we, the poor, the unemployed, the immigrants, all those who fill up your prisons are obliged to pay the price of our deeds. In contrast, those who brought us here by means of sweeps, batons and automatic guns will always enjoy the immunity that you open-handedly offer them, since double standards apply when it comes to decisions upon what is regarded as crime and what is not.

Finally, we make it clear to all that we, as prisoners of the Greek prisons, do not intend to take sides in the game that the Greek and Albanian embassies play. We only want a reply. Even if we take the provocatively untrue version of the police seriously, Messrs. Ministers, is it the capacity of former prisoner or that of immigrant that allows a human being’s death to be dealt with such worthlessness that not even objects deserve?

PS: As an action of protest, we will be delaying our night return to our cells by one hour for three days.

#kolastirio: “We are condemned to die in a country where the death penalty was abolished”